And then there were four…

Djokovic and Murray play tomorrow evening which will be a gripping contest. The Ivan Lendl coached Murray has been in superb form during the tournament but Djokovic has been even better. His forehand and backhand are both relentless and ruthless weapons, as is his serve. He covers the court effortlessly so if Murray is going to win his first ever major then he will have to play the best tennis of his life to beat the World No.1 tomorrow night.

The showpiece semi-final however is today, on Australia Day, between Nadal and Federer. This is their 10th meeting in a major tournament but only the second time that they have faced each other in the semi-finals (the last being 2005 French Open), such was their top two ranking dominance during the past five years. 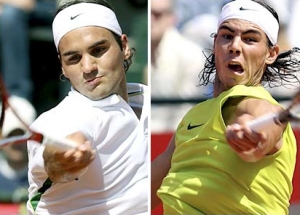 In the quarters, Federer surprisingly breezed past Del Potro. The first set was gripping as Federer broke Del Porto twice to move into a 4-0 lead only for Del Potro to replicate the Swiss master by winning the next four games, tieing the set at 4-4. Federer prevailed 6-4 and moved through the gears winning the remaining two straight sets in convincing fashion. Federer looks to be back to his best.

Nadal, on the other hand, struggled against Berdych. The big man from the Czech Republic took the first set, winning the tie break after the umpire bore the brunt of Nadal’s frustration. Rafa challenged a long shot from Berdych, which had been called in, two shots after it had happened (plus he glanced in Uncle Toni’s direction in the stands before making his decision) which is not allowed as challenges have to be instant. As it turned out, Berdych’s shot was long and it resulted in him getting a set point. From there he made no mistake and fired down an ace to give himself a 1-0 set lead. He also had a set point again in the second set but failed to capitalise resulting in Nadal levelling up the scores. Midway through the third set the match had already surpassed the three-hour mark. From that point, Nadal took little more than an hour to wrap up the match, booking the semi-final showdown which everyone wanted.

In Grand Slam tournaments, Nadal has a 7-2 win-loss record against Federer. The last time these two met, Down Under, was in the 2009 Final when Nadal won his sole Australian Open title. Nadal said,“I know I will be on court playing against probably the best of the history. Obviously my only way and my only chance to win is to play aggressively play very well and to play to the limit.”

Many are tipping Nadal to prevail, but I’m going for the Fed-express tonight in five sets. Federer had a very strong finish to last year after a largely disappointing 2011. His form during the last fortnight has been on a par with the Federer of old whereas Nadal just seems to lack the fluency of previous years. Either way, tonight has all the makings of an epic.