Floyd Mayweather Junior has agreed to fight Miguel Cotto on 5th May because he believes Manny Pacquiao is ducking him. As per my last post on the possibility of a Mayweather v Pacquiao showdown later this year Bob Arum, Pacquiao’s promoter, made it clear that a bout in May would not go ahead and preferred to fight in June – something which would be impossible for Mayweather given he is due to serve a three-month prison sentence commencing 1st June. Those of you who became over excited, at the initial announcements that the super fight was on, and were on the verge of planning a jovial little pre-summer excursion to Vegas still have the chance to do so with this fight. 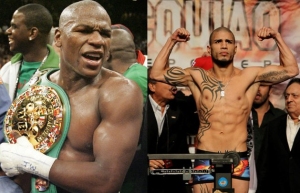 Fighting Cotto will be a challenge for Mayweather, as they will be fighting at junior middleweight (154 lbs). “Miguel Cotto is a world class fighter who can never be taken for granted and continues to prove he is one of the best in boxing. It will be a challenge for me to compete with him at this weight, but this is the type of test I thrive on and gives me the motivation to train even harder. I have no doubt in my mind that my title belt collection will increase once again and Cotto’s reign as champion will come to an end on May 5,” said Mayweather.

Pretty boy Floyd (42-0, 26 KOs) is a seven-time world champion in five weight divisions and has spent the majority of his career fighting at welterweight (147 lbs). The last time, and only time, which he fought at junior middleweight was against Oscar De La Hoya in May 2007, a fight which Mayweather won by split decision.

Miguel Cotto (37-2 32 KOs) meanwhile avenged his ‘loaded gloves’ defeat by Antonio Margarito in July 2008, by beating the Mexican last December at Madison Square Garden, with a 10th round TKO. At the press conference, Cotto said, “I am here to fight the biggest names in boxing. I’ve never ducked anyone or any challenge in front of me. I have accepted everything to give the fans what they like … great and exciting fights.”

The Puerto Rican’s only other loss was at the hands of Pacquaio where Cotto started the fight strongly only to fall away as Pacquaio went on to dominate the fight and force a stoppage in the 12th round. Cotto has held a world title every year since 2004, and has won 16 of the 18 world title bouts in which he has participated in. “This is what the sport of boxing is all about; making the fights that the fans want and deserve to see. On May 5, stay tuned, because I will convincingly beat Floyd Mayweather,” added the Puerto Rican.

Mayweather’s adviser said “This is a very risky fight for Floyd as Miguel is a solid 154-pound champion who has already proven to have great boxing abilities and to be a very competent and strong puncher. This is a big test for Floyd, but as always I believe, he is the superior fighter with unmatched skills. This will make the difference and lead to another Mayweather victory the night of May 5.”

Richard Schaefer (CEO – Golden Boy Promotions), promoting the fight added: “What we have here are two champions of amazing caliber set to meet in the ring on May 5 and give boxing and sports fan one of the most compelling match-ups in the sport’s history. Floyd Mayweather has already achieved worldwide recognition as one of the best fighters ever and Miguel Cotto is one of the greatest fighters of this era. I commend both fighters for agreeing to fight each other on one of the biggest weekends for boxing and also commend them for agreeing to participate in Olympic style drug testing, a precedent set by Floyd, which continues to uphold the integrity of the sport.”

Meanwhile it is expected that Pacquiao will fight Timonthy Bradley in Las Vegas in June.

Once again, and unsurprisingly, fight fans have been let down of the spectacle that really matters. The next possible date for a Mayweather vs Pacquiao bout is now November. The more and more this happens, I tend to agree with Floyd. Maybe the Pacman really is ducking him.