Tonight Cypriot Champions APOEL Nicosia travel to France to face Olympique Lyonnais in what is expected to be their sternest test to date in this season’s Champions League.

Back in November APOEL created history, amongst the freezing surroundings of St Petersburg, by becoming the first ever Cypriot team to reach the knockout stages of the Champions League, with a game to spare.

By that point, the Thrylos had beaten Zenit and the formidable Porto in Nicosia. Their away form was magnificent with three draws in venues where much bigger clubs had come unstuck in recent years – Russia, Ukraine (Shakhtar Donetsk) and Portugal.

Like other European states, Cyprus is currently going through a period of significant economic uncertainty. It’s debt was recently downgraded plus the island is still coming to terms with the Naval base explosion which claimed 12 lives in July 2011.

APOEL’s success on the pitch has somewhat lifted the gloom. To put the achievement into perspective, APOEL’s Champions league qualifying campaign started one month before the English Premiership kicked off. They faced and eliminated Albanian outfit Skenderbeu in July (6-0 on aggregate). Then they overcame Slovakian side Slovan Bratislava (2-0 on aggregate) to move into the final playoffs. Polish side Wisla Krakow won the first leg 1-0 but the Cypriots were 3-1 victors in Nicosia to book their second Champions League campaign (after qualifying in the 2009/10 season).

On that momentous November evening in St Petersburg, APOEL captain Constantinos Charalambides proudly said, “This is the biggest day and the biggest moment in the history of this football club. I don’t think anyone has really realised what has happened, especially as we were in such a tough group.”

After having a few months to reflect on his team’s achievements, Charalambides added, “Four or five years ago, no one could have picked out Cyprus or APOEL on a map of Europe, so our success is one future generations will look back on and appreciate.”

Charalambides added that the factor behind the team’s success is the “magical team spirit which naturally comes from the manager.” 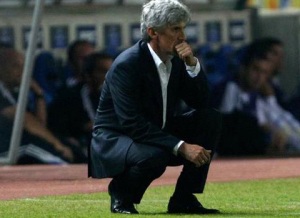 Speaking ahead of tonight’s eagerly awaited clash, the Serb said, “The dream is to qualify to the Champions League quarter-finals. Qualification would be an extension of an outstanding season and a demonstration that there are good teams in Cyprus, as well as an opportunity for the future of my team.”

Whilst APOEL meticulously prepare for tonight’s showdown in Lyon, the vast majority of Cyprus will be glued to television sets at home or in their local tavernas hoping that the fairy tale continues.

The return leg is scheduled to be played in Nicosia on 7th March.