After surrendering their title challenge against Arsenal, Spurs fans fear what the future holds for Ledley King

On Sunday afternoon, a high-flying Spurs side swaggered the four miles separating White Hart Lane and the Emirates confident that they were going to complete their first ‘double’ over the Gunners in almost 20 years. 90 minutes later and Spurs’ tail was firmly in-between their legs. Nobody expected the final result, and even at Wembley before the Carling Cup Final had kicked off, journalists sat stunned as they watched the action unfold in the Press Room. 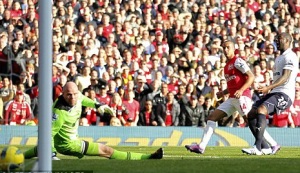 Arsenal rolled back the years, recovering from a 2-0 deficit to win 5-2, playing the fluid attacking football which they forged their reputation on in the early 00’s. However, six of the afternoon’s seven goals were ample ammunition for Alan Hansen’s, ‘Kids, if you’re watching at home, don’t ever defend like this’ post-match analysis. The other goal was sheer class from – Player of the Year in waiting – Robin Van Persie. It should also be noted that the likely future England manager did little at half time to stir his slumbering side into action as they were comprehensively outplayed in the second half (3-0) mainly due to their defensive frailties. And this is where this article begins.

Ledley King is one of Spurs’ greatest academy products. He is to Spurs, what Steven Gerrard is to Liverpool. Captain Marvel. He made his debut aged 18 and has made over 300 appearances in an injury-ravaged Spurs career. He is credited with scoring the fastest ever Premiership goal (a shade under 10 seconds against Bradford in December 2000). Thierry Henry has stated that King is the best defender he has ever played against because he is the only defender who did not have to foul him to win the ball. This makes for interesting reading. During King’s 311 games, he has been booked only 10 times and has never been sent off, averaging one caution every 31 games. Compare this to England’s main stay centre backs of Ferdinand (612 games, 52 yellows and 1 red average of 1 yellow every 12 games) and Terry (516 games, 92 yellows, 4 reds – 1 yellow every 6 games) for the last decade and it is unsurprising that Capello always sung his praises and kept a close eye on him, regardless of his knee problem. 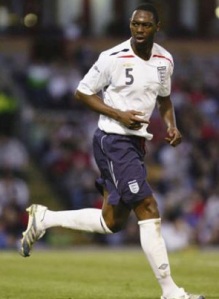 In Euro 2004, King replaced an injured John Terry at the heart of the Three Lions defence with the formidable task of marking Thierry Henry. England lost the game 2-1 thanks to a couple of individual errors in the last five minutes but King’s assured performance stood head and shoulders above the rest and his country did not fail to take notice. From there on, King was regularly linked with big money moves away from White Hart Lane but consistent periods on the sidelines meant that newspaper speculation remained exactly that.

In the last few seasons, King’s knee injury has been the main concern. A few years ago, there were rumours that the 31 year-old was on the verge of retirement. King has no cartilage in his knee, meaning bone rubs on bone (according to Redknapp’s expert medical analysis). His knee swells up after games and he cannot train apart from the day prior to a game. His regular fitness routine involves riding a stationary bike and swimming at the Spurs training ground. The knock-on effect is that King increases the risk of picking up minor injuries such as groin and hamstring niggles due to a distinct lack of football specific conditioning. King, though, has constantly defied conventional wisdom by not only playing but by putting in confident, rock solid displays at the back.

Although Spurs have progressed under Redknapp’s stewardship, statistics show that they are a stronger outfit with King in the side. Since Redknapp’s appointment in 2008, King has played in approximately 40% of all games. Spurs have a 57% success rate with King in the side compared to 43% without him. In addition, a King inspired defence keeps an average of five extra clean sheets every campaign. Redknapp, well aware of this fact, gave his captain a 20 game target this season in order to justify a new contract. (King’s contract expires this June but he has already notched up 16 appearances for the season – being on the losing side only twice).

A few months ago, ex-Spurs boss and TV pundit David Pleat, went to the Spurs training ground and caught up with King. He told Pleat that due to the lack of training, he felt that his timing was slightly off during the games and that he was half a yard behind where he used to be. Upon hearing this, it is only reasonable to assume that matters will only get worse. 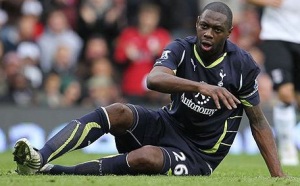 On Sunday, King’s lack of training was enormously exposed by Arsenal. Positionally he was at sixes and sevens. King was not helped by the vastly overrated Assou-Ekotto, who as an aside, always seems to save his worst performance of the season at the Emirates as the Frenchman had a tendency of relinquishing his defensive responsibilities. King was caught out for Arsenal’s third goal where Rosicky glided past him with ease to knock Arsenal ahead early in the second half and to compound matters, was then regularly invited to a foot race against the lightning Theo Walcott – coming off worse twice. Then with ten minutes left to play and his side 5-2 down, the Spurs skipper cut a lonely figure as he limped off the pitch replaced by Dawson.

Seeing a player of King’s calibre constantly struggle with the pace of the game was painful viewing. With hindsight, King’s inclusion ahead of Michael Dawson was an error on Redknapp’s part but King would have demanded to play, and quite rightly so. The result does all but end Spurs quest for an unlikely league title. The performance itself dents, but does not derail, their Champions League aspirations. Spurs now must pick themselves up to face an in-form Man Utd this weekend.

For King, he must now ponder what the future holds. Without doubt, Spurs owe it to him to offer him a new contract due to his exceptional service and loyalty, especially as a ‘one club’ man. He must remain at the Club, but in what capacity? Before the Arsenal game, some fans were still calling for King to go to the European Championships, but based on this performance their minds may have changed. Hopefully he will bounce back this season but it is unavoidable that in the long-term his condition, and therefore performances, will only deteriorate. Only Ledley King himself can decide whether pursuing a new contract is worth potentially ruining his Spurs legacy.