In a week when Lionel Messi created Champions League history by scoring five times against Bayer Leverkusen at the Camp Nou, another little jewel – Iker Muniain – put in an assured performance at Old Trafford announcing his arrival on the European stage.

Muniain (pronounced Mu-ni-ah-in), like Messi, plies his trade in La Liga. He is a 19 year-old winger / forward who plays for Athletico Bilbao. He’s been linked with Europe’s top clubs for a little while now and there’s a reason why.

During Messi’s formative years at Barcelona, he played as a winger. Samuel Eto’o led the front line, resulting in Messi receiving the ball out on the wing, cutting in and causing all sorts of havoc. Without burdening him with the massive weight of expectation, Muniain is a similar type of player. He created history back in July 2009 by becoming the youngest ever player for Athletico (16 years old) when he played in their Europa League qualifying match against Switzerland’s Young Boys. Athletico lost that match at home, but in the away leg, Muniain left his mark by breaking another record as he became the youngest ever scorer for the Club as the Spaniards triumphed 2-1 and thus, went through on away goals.

Muniain earned his first full cap for Spain in the recent 5-0 win against Venezuela. On Thursday night at Old Trafford, he scored the third goal which put Athletico 3-1 up, to top off an exciting performance where the Basque outfit comprehensively outplayed the English Champions with an excellent display of passing and movement in addition to a vastly superior high work rate. 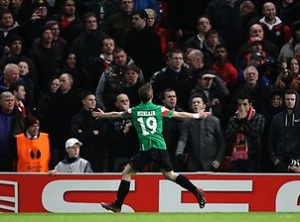 Ironically, Manchester United were believed to be tracking the starlet and based on last night’s performance, they and the rest of Europe’s big boys will be keeping a watchful eye on Muniain’s progress.