Due to the devastation caused by the second World War, the Olympics were halted for a period of 12 years. They returned in 1948, to London, 40 years after the English capital had held the Games in 1908. The 1948 Olympics were known as the ‘Austerity Games’ due to post war food rationing and the economic climate. There were no new venues and athletes did not have the luxury of an Olympic Village – instead they lived in existing accommodation.

In spite of this, 59 nations and over 4,000 athletes participated in the London 1948 Games. For their roles in the War, Germany and Japan were not invited to participate. Furthermore, the USSR decided against sending any athletes to London.

The London Games were the first to be broadcasted live on television. For those lucky enough to have televisions back then, they were in for a treat.

There were three main star performers in 1948. Dutch sprinter Fanny Blankers-Koen, nicknamed ‘the flying housewife’, won four golds on the track. 17 year-old Bob Mathias became the youngest ever male athlete to win a gold medal as he won the decathlon – an event which he only took up four months prior to the commencement of the Games. Finland’s Veikkon Huhtanen won five medals in gymnastics, taking three golds, one silver and one bronze.

Karoly Takacs was an athlete who overcame a significant amount of adversity at the Games. Takacs, a Hungarian, was a member of the 1938 World Championship winning Hungarian pistol team. A grenade blew his right hand (pistol hand) apart shortly after, resulting in him training himself to shoot with his left. Ten years later, at the London Games, he had a gold medal in the rapid fire pistol event to show off his achievements. 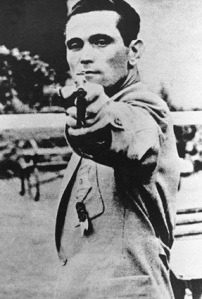 The US finished top of the medal table with 84 medals – 38 were gold. Hosts, Britain, finished a lowly 12th in the rankings with only three golds.

Finland was originally due to host the Games in 1940 but obviously due to the outbreak of war, the Games were postponed. 12 years later and it was the Finns turn to dazzle the world. The Helsinki Games were famous for the most world records set at an Olympics (before Beijing 2008). 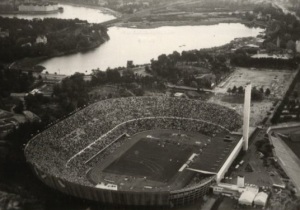 USSR and Israel made their Olympic debuts. USSR women commenced a dominant period in gymnastics as they cleaned up in Helsinki, keeping a firm grasp on the competition for a further 40 years.

Czech long distance runner Emil Zatopek became the first runner to win the 5,000m, the 10,000m and the marathon (his first ever marathon) at the same Games. Plus Bob Mathias, still only 21, successfully defended his decathlon title.

Although the USA topped the tables again, they felt the heat from the USSR who finished second winning 71 medals compared to USA’s 76.

1956 saw the first Olympics Down Under. Melbourne beat fierce competition from Buenos Aires to host the Games. However, due to Australia’s strict quarantine control, the equestrian events had to take place in Stockholm in June (five months before the Olympics started in Australia due to differences between Northern and Southern hemisphere summer time).

The 1956 Games were the first to feel political tensions. Spain, Switzerland and Holland all boycotted the Games due to USSR’s invasion of Hungary, whilst Egypt, Iraq and Lebanon all boycotted following the Suez canal crisis.

Hungary did face the Soviet Union in water polo in a match that became known as the ‘Blood in the Water’ match. They game was understandably rough and when one of the Hungarian players had to leave the pool due to a cut eye, a riot almost broke out. Order was restored and the Hungarians went on to win the gold medal, to the delight of the Australian crowd. 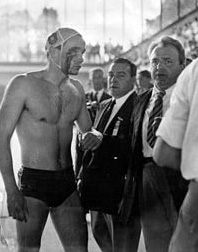 Alain Mimoun of France, who had continuously tasted the disappointment of finishing as runner-up to Emil Zatopek over the years, won the marathon but waited at the finish line for his friend and great rival, who crossed the line in sixth place. The hosts, Australia, excelled in the swimming events, winning eight gold, four silver and two bronze medals. They won all of the freestyle swimming events for men and women. The USA basketball team showed it’s ‘Dream Team’ origin as they dismantled all of their opposition, beating each team by at least 30 points.

Due to the political unrest and tensions at the Games, Melbourne 1956 became the first Games where athletes would mingle with each other at the Closing Ceremony, rather than march with their countries. This was a concept of a young Melburnian named John Ian Wing, which has been repeated at all Olympics since.

The Soviet Union knocked the United States of its perch with 24 more medals including five more golds.

Italy was due to host the Olympics in 1908 but due to the eruption of Mount Vesuvius, the country was in no fit state to host the Games. So 54 years after the eruption (1906), Italy was awarded the honour to entertain the world. The Italians made the most of this by implementing as many Roman influences into the Games such as setting the venues for wrestling at the Basilica of Maxentius and gymnastics at the Caracalla Baths.

Highlights of the 1960 Games were:

Also, during the Rome Olympics, a young star by the name of Cassius Marcellus Clay was born by winning the light-heavyweight gold medal. Clay’s Olympic triumph signalled the end of his amateur boxing career which he finished with 100 wins and just five defeats. Six weeks after the Olympics Clay turned professional and the rest is history (Muhammad Ali Sports biography to be covered soon by Melosport)

The Soviet Union continued its recent dominance over the United States by winning over 100 medals, 32 more than the US (43 golds compared to 34).

Coming soon on Melosport: The first Asian Olympics through to the Munich Massacre and African boycotts (Tokyo 1964 to Montreal 1976)

– The ancient Olympics and the revival of the modern-day Games