Have your say – What’s the best ever Premiership game?

This season, the Premier League celebrates it’s 20th season. There are several awards to commemorate this great occasion include the best ever game, best player, best goal, best save and best celebration.

Today Melosport discusses the best ever game. There have been numerous crackers over the years. Ten matches have been shortlisted and Melosport analyses the top five.

Hard to argue against this match being the best ever. Stan Collymore scored the winner late into the game after a nostalgic set of one-two’s from Ian Rush and John Barnes. Liverpool drew first blood through a Robbie Fowler header, but Ferdinand equalised. Ginola superbly put Newcastle 2-1 up before Fowler grabbed his second of the night. Asprilla then made it 3-2 to the Geordies with the outside of his foot before Collymore levelled the match to 3-3. Collymore won the game for the Reds sending the Kop wild whilst Kevin Keegan became a mess of a man.

The Geordies totally outclassed Man United at St James Park. Darren Peacock put Newcastle 1-0 up. Another fantastic Ginola effort made it 2-0, before Ferdinand and Shearer got in on the action. Phillippe Albert added a fifth with an exquisite chip to put the icing on the cake.

An astonishing game at White Hart Lane and Melosport’s vote for number one – as I witnessed it. Dean Richards, on his debut, headed Spurs in front from a corner. Les Ferdinand beat the offside trap and calmly put Spurs 2-0 up. A Christian Ziege header had Spurs in dreamland with a 3-0 half-time lead. However, I distinctly remember two things after half-time. Firstly, the travelling United fans cheered their team louder than the Spurs fans did when both teams re-emerged for the second half, which I found surprising. Secondly, United took the centre and Spurs did not touch the ball until they picked it up after it was rustling in the back of the onion-bag following Andy Cole’s finish. Even at 3-1, you could sense the nervousness amongst the Spurs fans. United drew level after further goals from Laurent Blanc and Ruud Van Nistelrooy. With almost 20 minutes still left to play, there was only going to be one winner. Cue Juan Sebastian Veron to play with the vision and poise that prompted Ferguson to part with £28m. 3-4 to United. Beckham sealed the victory with a sweetly struck effort. Eight goals, eight different scorers, all at the same end. 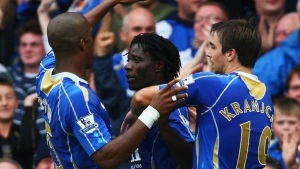 Fratton Park witnessed 11 goals on an Autumn Saturday. The most in a game in the Premier League’s history. Benjani scored a hat-trick for Pompey. Hreidarsson, Niko Kranjcar, Sean Davis and Muntari completed the scoring for Portsmouth. Hunt, Kitson, Long and Shorey replied for Reading.

Harry Redknapp’s first North London derby ended in an unlikely draw after his side were 4-2 down with one minute of normal time left to play. Jermaine Jenas curled in a left foot effort to reduce the deficit to 4-3 and then Aaron Lennon scrambled in Luka Modric’s fine strike which rebounded off the post, to spark frenzied celebrations. David Bentley had given Spurs an early lead against his former employers spectacularly volleying in from 40 yards. Mikael Silvestre, William Gallas and Emmanuel Adebayor edged the Gunners into a 3-1 lead. Darren Bent replied for Spurs to give them hope but Robin Van Persie restored the two goal lead almost immediately. Then with 60 seconds left on the clock, Jenas and Lennon ensured that Spurs remained undefeated under Redknapp.

The other five games in the short list are:

Arsenal and Arshavin had four shots on goal at Anfield, scoring all four.

Newcastle salvaged a draw after being 4-0 down against the Gunners.

Arsenal, again making the top ten, but this time they were demolished by a rampant Man United.

United were given a taste of their own medicine as City’s title challenge became the read deal at Old Trafford.

What’s your most memorable Premier League game and why?