With less than 100 days until the globe’s largest sporting event – Melosport continues with its historic look at the Olympics, covering the first Asian Olympics, plus the tragic 1972 Munich Games through to the Montreal Games.

These were the first Games held on the Asian continent. The Olympics were held at the height of the Cold War. As a result, Yoshinori Sakai, was chosen as the torch-bearer to aid calls for world peace. Sakai was born in Hiroshima on the day the first atomic bomb was dropped – 6th August 1945.

Local hero Osamu Watanabe, retired from the Olympics, winning gold in the freestyle wrestling event. He became the only undefeated Olympian to date with a record of 189 wins and no losses.

There were world records set in all sprint events (all sprints up to and including 400 metres), plus the long jump and triple jump. The most famous feat was in the long jump, where American Bob Beaman, who toiled just to make the final round, jumped an astonishing 8.90 metres to emphatically claim the gold medal. His world record stood for 23 years.

Dick Fosbury also created history as he won the high jump with his unique jumping technique, known today as the ‘Fosbury Flop’ which is now adopted by all high jumping athletes.

There was an act of racial protest during the 1968 Games. During the medal presentation ceremony for the 200 metres, black athletes Tommie Smith and John Carlos, gold and bronze medal winners respectively, raised a black-gloved fist and hung their heads when their country’s national anthem was played. Both were protesting against racial segregation in the United States and were subsequently expelled from the Olympic Village. Australian Peter Norman, who finished second, supported Smith and Carlos by wearing an American Civil Rights badge. Although Norman was not expelled from the Olympic Village, he was banned from competing in the 1972 Games. 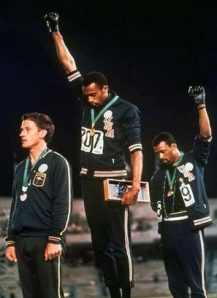 The U.S. team returned to its perch by winning 107 medals, including 45 golds. The second placed Soviets won 91 medals with 29 being gold.

The Munich Games were overshadowed by the tragic events which unfolded on 5th September. Eight Palestinian terrorists, from the militant group Black September, killed two members of the Israeli Olympic team and took another nine hostage. In a botched rescue attempt, all of the hostages were killed, along with five of the terrorists. 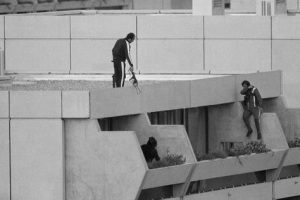 The Games were suspended for 34 hours and a Mass was held in the Olympic Stadium to commemorate the victims. Avery Brundage, the IOC President, declared that the Games should still continue, which they did.

Due to New Zealand’s rugby tour of apartheid South Africa, 22 African countries decided to boycott the 1976 Games as they were unhappy that the IOC had not banned New Zealand from competing.

Romanian gymnast, Nadia Comăneci, was the star of the Games. The 14 year-old became the first gymnast to score a perfect 10 when performing on the uneven bars. She then went on to score another six perfect 10s – on her way to winning three gold medals.

On the track, Alberto Juantorena of Cuba completed the first 400m and 800m double victory.

For the first ever Olympics, USA did not finish in the top two of the medal table. The Soviet Union finished top with East Germany as runners-up.

– The ancient Olympics and the revival of the modern-day Games