On Sunday there will be wild celebrations in Manchester. Either the blue or the red half of Manchester will be crowing in their status as newly crowned English league champions. City are currently in pole position, albeit by a whisker, on goal difference. They entertain Mark Hughes’ QPR this Sunday, who themselves need a win or even a draw to be safe from relegation. A City win would almost certainly guarantee (City have a more favourable goal difference by eight over United) their first league title in 44 years.

Fergie’s mind games have predictably gone into over-drive this week. He expressed that he wished “Sparky was playing” against City on Sunday, and that “he was sacked in a very unethical way and he’ll remember that”. True but in all honesty Hughes requires no motivation from Ferguson. Very harshly sacked after just 18 months at City, Hughes still visibly bears the mental scars from the experience. “Maybe it’s a little bit fated that I’m going back to City on the final day. If we were to get something, it would be a fantastic story. They’re going for the title, we’re trying to stay in the league. That fixture loomed quite ominously in the distant future when I first took over here [in January]. But maybe now the stars have aligned and things have fallen on our side of the line.” 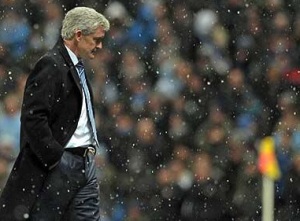 A quick refresher. On 19 December 2009, Hughes received phone calls from friends and journalists who told him he was about to get sacked at City. Newspaper headlines fuelled the speculation but when Hughes understandably wanted clarification from his own employers, he endured a deafening silence as City’s press officer was conveniently ‘away’ and none of the Board members replied to his messages. What to do? He and his coaching team went about their usual match-day duties, culminating in a 4-3 win over Sunderland in the afternoon. Minutes after the final whistle, Hughes was sacked with Mancini appointed as successor. Don’t forget, this is not just about Hughes getting one over City. If he does so, he would have also saved QPR from the drop who looked doomed back in February. Five back-to-back home wins over tough opposition (Liverpool, Arsenal and Spurs were three of their five victims) has instilled the belief that the R’s can survive and entertain the same teams again next season.

Back to the title. For the neutral it is an interesting one – United or City? City, after all, have hyper-spent their way to the top but United are hardly their poor neighbours. United have been totally dominant over the last 20 years and regardless of the Abu Dhabi cash cow, many supporters want the Premier League trophy to have different letters scratched in this year. So when City were recently eight points behind United, there were shrugs of the shoulders as fans thought, ‘here we go again’ – a familiar outcome with United’s foes falling away with only a few games to go. But following uncharacteristic stumbles, it is out of United’s hands. Even Swansea’s fans could not help themselves whilst visiting Old Trafford at the weekend singing ‘eight points and you ****** it up’. 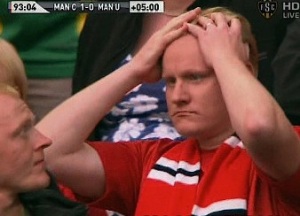 The title is City’s to lose. It is a massive ask for QPR to get anything in Manchester this weekend. City’s home record has yielded an astonishing 52 points from a possible 54. 17 teams have left Etihad Stadium pointless this season. Only Sunderland have emerged ‘victorious’ and that was a 3-3 draw. For their part, United travel to the North-East to take on Martin O’Neill’s men on Sunday. With only a top-ten finish to play for, Sunderland are unlikely to offer much resistance. However, this season’s finale is similar to the 1994/95 season when Blackburn led going into the last day of the season and although they lost to Liverpool, Andy Cole et al spurned numerous chances ending up with a 1-1 draw at Upton Park, handing the title to Blackburn.

Should City become unstuck at the hands of Mark Hughes this weekend and United capitalise, you can ensure that Sparky, and not Fergie, will feel the most satisfaction. Karma works in mysterious way.