Last night, at Bayern Munich’s Allianz Arena home ground, Chelsea wrote a new chapter in their recently successful history by winning the coveted Champions League and, at the same time, gave their fierce London rivals, Spurs, a kick in the teeth by eliminating them from next season’s competition before they have even kicked a ball.

Bayern peppered the Chelsea goal for the entire 90 minutes and it seemed that the ever efficient Germans saved their best until last as Thomas Muller headed them in front after 83 minutes. They celebrated as if they had won the final but it spurred Chelsea into action. Didier Drogba rose highest at an 88th minute corner to powerfully head an equaliser and force the game into extra-time. Drogba soon turned from hero to villain as he fouled Franck Ribery to give Bayern a penalty in the opening extra-time exchanges. Arjen Robben stepped up and Petr Cech saved. Meanwhile Ribery hobbled off the pitch. The tide was certainly turning Chelsea’s way.

The game moved to penalties and even then Bayern took the initiative as they went into a 3-1 lead, thanks to their goal keeper Manuel Neuer saving from Juan Mata whilst himself taking and converting Bayern’s third. Frank Lampard took the high pressured third Chelsea penalty to make it 2-3 before Ivica Olić’s effort was saved by Cech and Ashley Cole made it 3-3. At that point, the neutrals confirmed their thoughts that Chelsea’s name was on the cup. The ever reliable Bastian Schweinsteiger took Bayern’s fifth penalty which Cech fingered onto a post. Tears. Up stepped Didier Drogba to win Chelsea their first Champions League with perhaps his last kick for the club. Importantly, it maintained an astonishing record that no English club has lost to a foreign club on penalties in the Champions League – ever. How the England national team crave for such a record. 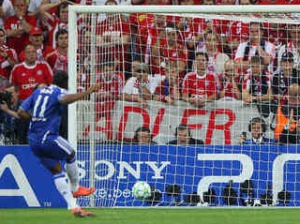 Cue the celebrations. Even the shy owner, Roman Abramovich, was in the limelight and showed emotion, hugging all of his players as they walked up the mountain of steps to collect their medals and the gleaming Champions League trophy. Unsurprising really, considering he has personally bankrolled the club onto this platform. And what of the suspended John Terry being allowed to collect the trophy – poor decision making by UEFA.

It was a Chelsea performance which matched expectations. Defend. Then defend some more. In fairness they were well organised and packed their half, and more specifically their penalty area, in large numbers, leaving Bayern to snatch at chances. It does have to be noted that Bayern completely dominated the proceedings as they had 24 attempts on goal compared to Chelsea’s six. Chelsea’s style, under Di Matteo, has been similar to Greece’s successful Euro 2004 campaign. However, that Greece team gave opposition teams nothing, unlike Chelsea, who’s opponents such as Lionel Messi, Mario Gomez and Arjen Robben will cringe if they ever watch their recent footage.

Credit to the Londoners though as they won the tournament the hard way. Unbelievably Chelsea fought back from a losing position to beat an in-form Napoli, then frustrated Pep Guardiola’s sensational Barcelona over two legs before performing the same game plan in the final. However some experts, foolishly, have been quick to praise Chelsea’s defensive style saying that teams now need to evolve the attacking game in order to break them down. This, to me, is absolutely absurd. Chelsea have undoubtedly lived a charmed life in this season’s Champions League. Two crucial penalty misses from Messi and Robben says so. Chelsea did not dominate teams defensively. Chances were created by the opposition and were there to be taken. Barcelona and Bayern only have themselves blame. They opened up Chelsea numerous times but lacked composure at the critical moments.

Spare a thought for Andre Villas-Boas. Sacked when Chelsea’s Champions League aspirations were in the balance and replaced by the man who the Portuguese brought into the club as his number two. That man, Roberto Di Matteo, has coached the Blues through pure passion drawing on his own heroic experience as a Chelsea cup winner. And how the players have responded. “Football, and life, is sometimes unpredictable and crazy. I dont think anyone could have predicted this,” said the triumphant Italian.

Then it was Ashley Cole’s turn to be interviewed by Sky Sports. “Ashley, twice a runner-up, finally a winner.” Cole replied, “No-one can say nufink to me now. That’s why I come ‘ere”. In depth and insightful stuff from England’s left-back.

So what now for Roman Abramovich? The promised land has been reached. Will he want to savour more European success or will he pull the plug? Will he offer Di Matteo a full-time contract? As popular as he is with the players, is Di Matteo capable of making Chelsea play in Roman’s ideal, aesthetically pleasing, Barca-esque way? Extremely unlikely. For now that does not really matter – Chelsea should celebrate that they are Champions League winners.