Money makes the football world go around – Greed is good

‘If we dont (qualify for the Champions League) then we obviously have to sit down and see what’s best for myself’.

That was Gareth Bale replying to journalists questions before Chelsea beat Bayern Munich on Saturday night – a result which meant that Spurs trumped Everton’s record for the briefest English stay in Europe’s elite competition as the Lillywhites lost their Champions League berth to their fierce rivals before a ball has even been kicked next season.

So the writing is now on the wall – Bale wants out – with Barcelona or Real Madrid appearing to be the most likely options. In all honesty, if I was a professional footballer – I would love to play for Barca or Real. Any true lover of football would. Go to the Camp Nou or the Santiago Bernabeu, sample the stadium, the aura, the atmosphere and the respective cities’ delights in person – there is no contest. Training with the creme de la creme and then retiring to fish and chips under grey skies in Britain or paella at a multi-million pound villa with a sea view of the Mediterranean? My issue is not with players moving onto bigger and more established clubs. 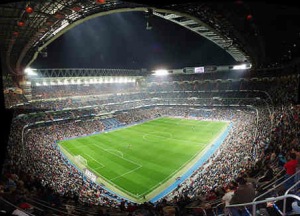 My problem is with UEFA and their damned tournament named the Champions League. In the past ten years, it has become the be-all and end-all for top-end, self-indulgent professional footballers. Europa League? Forget about it. Just look at both Manchester clubs’ participation in that tournament this season. Uninterested.

Back in the day, the European Cup was solely contested by the champions of each league. The Europa League’s predecessor, the UEFA Cup, was held in high prestige as it was essentially the best of the rest. Then there was the European Cup-Winners’ Cup. Three tournaments which meant something. Three tournaments which did not require tampering. So where did it all go wrong? When football became a business. Presumably when Lennart Johansson (UEFA President from 1990 to 2007) watched Wall Street and clapped his hands when he heard Michael Douglas’ character, Gordon Gekko, proclaim that ‘greed is good’.

The European Cup was revamped into the Champions League. At first the domestic league winners and runners-up were invited. This gradually increased to third placed teams and so on. The term ‘Champions League’ became an oxymoron. As the tournament grew more interest, sponsorship contracts went through the roof. To put matters into perspective, Mastercard (one of the major CL sponsors) have asked UEFA to push back the Champions League final kickoff time next season in order to benefit the Asian audience. More sponsorship means more prize money and more prize money means richer football clubs. A vicious circle. Look at England’s dominance domestically. Arsenal, Man Utd and Chelsea (under Abramovich) have been regular participants meaning players want to play for these clubs. Now the Arab-fuelled Man City have joined the party – what chance does anyone else have? Chelsea won the Champions League after finishing sixth domestically whereas Spurs, despite their final third of the season slump, comfortably finished two positions above them.

Spurs have now finished in the top five three seasons in a row – a feat last achieved under the great Bill Nicholson in the early 60’s. Yet, we are led to believe that their star player(s) are not happy and wish to jump ship. All because of what? That they might not play against Milan at the San Siro next season. These players who wish to leave are the very same who started to run out of puff in February, at a time when Spurs fans would mock their Arsenal counterparts warning them to ‘mind the gap’, such was the daylight between high flying Spurs and their arch rivals. So after labouring through February, March and April, Spurs finished fourth and are being faced with negative press. Any other season and everything would be fine, but after Chelsea beat Bayern, a spanner was thrown into the works. The result – another season without Champions League football. Financially the club, currently looking at financing a new stadium project, could be up to £35m worse off in potential prize money. So the chairman, Daniel Levy, faces another tough summer.

Twelve months ago Luka Modric dug his little heels in, declaring to the football world that his heart lay with Chelsea and that his Spurs career was over. That did not work out too well for the Croatian as Levy, boldly, ventured into no man’s land territory by telling the mercurial midfielder, he would not be going anywhere. Astoundingly, the public sympathised with Modric. You can picture a cabbie with a thick cockney accent lecturing his latest customer, ‘what a bully that Levy is’. It was insane to even think that Levy was doing anything wrong in insisting that Modric honoured his contract. I, personally, could not care less how much more he could earn at Chelsea. He still earns more in a year than someone working on an average wage for over 40 years! Granted Chelsea won two Cups, meaning two winners’ medals compared to none in North London but Spurs did finish two places higher than Chelsea. Even the most staunch Chelsea fan could not argue that their success this season has been extremely fortunate. A critical goal given which clearly did not cross the line plus two penalties missed against them by two of the world’s most in-form players. Hardly the first step to greatness in anyone’s book. The harsh reality is that Chelsea now have to start a rebuilding programme. Drogba’s announced he is leaving, Fernando Torres is whining, Frank Lampard surely cannot produce anymore 50 game seasons and John Terry is a liability in every sense of the word. Therefore where would, say Luka Modric, want to play next season – Chelsea or a solid Spurs team? Chelsea, without a doubt, because of Champions League football.

This leaves the game in a real sorry state. Kenny Dalglish, the Liverpool legend, was sacked last week after winning the League Cup and reaching the FA Cup final with the Reds. 15 years ago his achievements this season would have been extremely satisfactory yet Rick Parry, Liverpool’s former Chief Executive, underlined the ambitions at Anfield, “We always said to be in the Champions League isn’t a goal, it’s a minimum requirement.” A minimum requirement? Clubs should be judged by their success in terms of trophies. Dalglish a piece of silverware and was fingertips away from adding another, but football success is not measured by trophies anymore, it is measured by income and that’s where UEFA are responsible.

The Champions League is extremely lucrative. Cypriots, APOEL, finished in the quarter-finals this season and by doing so earnt themselves €30m. For a club that has total expenditure figures of €8m per year, Christmas has come early. Success now relates to how many times a club plays in the Champions League, plain and simple. Even the grand, old FA Cup is being neglected in favour of finishing fourth. The last time I read an honours list at a club, third and fourth placed finishes were not mentioned, but this may all change soon. UEFA willingly deflect any criticism aimed towards them by muttering about their mighty Financial Fair Play initiative. I would like to know how stringently regulated the FFP is. For example, there is absolutely no way Manchester City can meet the set three-year breakeven criteria without any, how dare I put it, shoddy dealings (family money £400m Etihad sponsorship…). The same applies to Chelsea. They won the Champions League but the winnings do not even cover the transfer outlay on Torres and David Luiz.

It is sadly clear that the vast majority of football men live by Gordon Gekko’s words. The Champions League is only likely to get bigger and bolder with a European Super League becoming inevitable. The rich will get richer and the poor will get poorer. If you ask anyone at the Swiss headquarters, greed is good.