Without doubt, the biggest sporting spectacle in 2012 will be taking place in London in late July through to September. However, the football calendar this summer takes fans all over Europe to Poland and the Ukraine for the European Championships. On 8th June, Poland kick-off their European Championships joint-venture, when they take on former champions Greece in Warsaw. 16 of Europe’s finest, have made the cut and will be dreaming of European glory on Sunday 1st July in Kiev.

Today, Melosport previews the eight teams in Groups A & B.

Joint hosts Poland are under a considerable amount of pressure to perform at home. Coach Franciszek Smuda was appointed in 2009 and addressed the media that his Poland side would be playing “offensive and attractive football”. A 6-0 hammering by the future World Champions Spain ensured that he did not get carried away with his vision and kept his feet firmly on the ground.

Although this is a country which has only previously qualified once for the European Championships, there is an expectation to reach the last 16 stage. The Poles know that a good start is paramount to this objective and will therefore be looking for the three points against the Greeks, a week on Friday.

In 2004, Greece proved the occasional sporting metaphor of the whole being greater than the sum of its parts. Under German coach Otto Rehhagel, the Greeks, in the space of less than a month, went from never winning a game in a major tournament, to being crowned European Champions. They did not have all-star players, but they had great organisation and tactical nous. The win resulted in magnificent free advertising for their shirt sponsor Adidas who rightly, and proudly, proclaimed that ‘impossible is nothing’.

Since 2004, Greece have flattered to deceive at every major tournament. They did not progress beyond the group stages when they defended their trophy in 2008. The 2010 World Cup showed no improvement, as again, they were eliminated in the group phase. However, under new coach Fernando Santos, they finished top of a qualifying group which contained Croatia, winning seven and drawing three of their ten games.

Over time, Santos has introduced younger players into his squad at the expense of experienced campaigners. Greece conceded only five goals during their qualifying campaign. Expect compact and efficient performances from the Greeks. If they beat the hosts in their first game there will be a feeling of deja-vu as they beat hosts Portugal in their first game of the 2004 tournament.

Deciding to stick with Dutch influence, Dick Advocaat took over from Gus Hiddink following the Russians failure to qualify for 2010 World Cup. The result was Russia topping their qualifying table for the first time in five qualifying attempts. Advocaat will be returning to his native Holland after the Euros to take charge at PSV (14 years after his last stint).

Andrei Arshavin has much to prove this summer. Undoubtedly, one of the stars of Euro ’08, Ashavin led Russia to the semi-finals with excellent performances leaving Europe’s top club sides queuing up for his signature. Four years on, he is a shadow of that player. Arsenal fans have become frustrated over the years with his laziness and poor attitude. Euro 2012 is a stage for a star like Arshavin to re-showcase his talent.

The current Czech Republic side do not quite match the dizzy heights of Euro ’96 and ’04. Their qualifying campaign was patchy as they only just beat Scotland into the runners-up position. Although they did beat Montenegro comfortably (3-0 on aggregate) in the play-offs, the Czechs did have the second worst qualifying campaign of all of the second-placed teams.  Aside from the doom and gloom, coach Michal Bilek has been injecting new blood into his team. This culminated in the play-off victory, but the jubilant mood in the dressing-room somewhat diminished after the Czech players were caught on video singing, “Radek Drulak has no d*ck”, as a response to the Czech striker-turned-pundit who aimed criticism at the national team.

Boosting the Czechs chances of qualifying into the knock-out phase, playmaker Tomas Rosicky, has recovered from injury and has been included in the squad.  In addition, Petr Cech, fresh from signing a new Chelsea contract and still on a high following the Champions League win, takes his place in-between the sticks. Milan Baros, still only 30, is a previous Golden Boot winner (2004) and cannot be discounted as a threat. The Czechs do have the tools to shake up Group A.

Melosport prediction for Group A – This is the weakest group of the tournament. Any team could finish top or bottom. In light of this, I tip the hosts to at least put up a fight. Greece and Russia, edging out Poland, to advance through to the knock out round of 16.

Winners during the golden era of Gullit, Rijkaard and Van Basten et al in 1988, the Netherlands are back to being one of the best sides in the world. Having recently reached the World Cup final in 2010, they surprisingly set out with a negative and brutal game plan to stifle their Spanish opponents, which did not earn them any plaudits. Ironically, the football Spain are famous and admired for originated in Holland under Rinus Michels, which was then perfected by Johan Cruyff whilst at Barcelona. 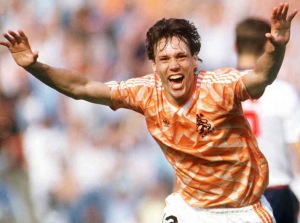 Holland are strong contenders for the Euro 2012 crown. Under coach Bert Van Marwijk they have a formidable record winning 31 of 45 games, losing just 4. Robin Van Persie has recently been crowned Player of the Year in England following his 37 goals and 15 assists in 47 games for Arsenal. Arjen Robben had a brilliant season with Bayern Munich until the Champions League final where he missed a penalty in extra-time. He is an essential ingredient to Holland’s successful formula so the Dutch will be hoping he can shake off his Champions League nightmare.

Furthermore, Wesley Sneijder, Rafael Van Der Vaart and Mark Van Bommel add significant attacking pedigree and experience to the team. The issues are strength in-depth. Holland played a friendly against their group opponents, Germany losing 3-0, albeit without a few of their stars. This is a psychological advantage to the Germans before the old enemies meet on 13th June.

Since the 2006 World Cup on home soil, Germany have gone from strength to strength. That tournament proved a catalyst for the Germans as they reached the semi-finals under the tutelage of Jurgen Klinsmann. His assistant, Joachim Low, took over, becoming European Championship finalists and World Cup semi-finalists in his first two tournaments in-charge. On both occasions his side lost to eventual champions Spain.

Their Euro 2012 qualifying campaign resulted in an emphatic 100% record with ten wins from ten games. Low believes that his players are ready to deliver this summer. “The squad I have is hungry, driven and very focused on the goal of winning. We know how to live with the pressure.”

Miroslav Klose (closing in on Gerd Muller’s scoring record), Phillip Lahm, Lucas Podolski and Bastian Schweinsteiger are the experienced heads in the squad. This is perfectly complemented by the likes of now-established stars in Manuel Neuer, Mehmet Ozil, Sami Khedira and Thomas Muller, who between them, already have 108 caps. With the perfect balance of youth, energy and experience, Germany will be a tough match for anyone.

Portugal forward Cristiano Ronaldo, the most expensive footballer on Earth, enjoyed his first La Liga title this season with Real Madrid. He scored an incredible 60 goals (46 league goals) in 55 games for Madrid. He became the first player in La Liga history to score 40 league goals in two seasons, which he even managed to do in successive seasons. Phenomenal stuff and he still finishes second in the World Player of the Year award! The Portuguese public have high expectations of their country, solely based on the exploits of Ronaldo and Nani. Portugal coach Paulo Bento though says, “we can’t expect Ronaldo to solve all of our problems, that wouldn’t be fair. We must beat other teams as a team, not counting on just one or two individuals.”

Along with the likes of Raul Meireles and Helder Postiga (the ex-Spurs forward who has a better international scoring record than a club scoring record), there is ample fire power in this squad. The question is whether Portugal can play as a team. They beat Bosnia in the play-offs (6-2 on aggregate) but only after they drew 0-0 in Bosnia.

Morten Olsen is the only man ever to achieve a century of international matches both as a player and as a coach. He celebrates coaching Denmark for ten years this July and it’s not  an impossibility that the Danes could throw a spanner in the works and make the last 16. Olsen has a young squad with only a few experienced heads in Dennis Rommedahl, Christian Poulsen and Thomas Sorensen. The Danes, famed for producing the Laudrup brothers, have a new generation emerging in youngsters such as Ajax forward, Christian Eriksen. Already widely tipped as one of Europe’s most exciting young talents, he will be keen to impress further this summer. He helped Ajax win the Eredivisie title this season and his vision and flair are crucial, if Denmark are to cause an upset.

Ironically, the last time Denmark truly shone, it was against two of their three opponents in Group B. In 1992, the Danes answered a last-minute call to partake in the European Championships. In less than a month, they went from sunning themselves during their summer holidays to celebrating as the toast of Europe as they eliminated holders Holland in the semi-finals and beat favourites Germany in the final.

Melosport prediction for Group B – This group boasts a stunning array of attacking talent. Van Persie, Ronaldo, Eriksen, Robben, Sneijder, Van Der Vaart, Nani, Muller and Ozil amongst others. Expect there to be goals in Group B. It is difficult to look beyond Holland and Germany qualifying from the group. Both nations have excellent records in recent tournaments and are probably at their peak.