Arsenal and Chelsea fans laughed and rubbed their hands with glee. Liverpool fans shook their heads in disbelief and had a little chuckle under their breath. Both current and ex-professionals jumped onto Twitter to express their shock. What are Tottenham doing? Are they mad?

On paper, the simple and most obvious answer is ‘yes’. Daniel Levy, spearheading the Spurs board, decided to part company with Harry Redknapp after three and a half years at White Hart Lane. Redknapp arrived from Pompey to Spurs with the Londoners languishing at the foot of the Premier League table. In three years, he had taken the club from bottom to a whisker off the top. Back in autumn 2008, two, measly points from eight games cost Juande Ramos his job and left the Spurs board in no doubt that ‘Arry was their man. They were right as 30 league games later, Spurs finished eighth. A solid achievement with a squad which he inherited. In the following two transfer windows Redknapp did what he does best – the unwanted job title of wheeling and dealing – and that is where the eyebrows first started being raised amongst the N.17 hierarchy. Promising and expensive younger players such as Darren Bent and David Bentley were not part of the gaffer’s plans but the likes of Peter Crouch and ex-lillywhite players such as Jermaine Defoe, Robbie Keane, Younes Kaboul and Pascal Chimbonda were. Levy’s policy of only spending on young players was turned on its head but given Redknapp’s results, he reluctantly went ahead with it all.

Spurs, on the pitch, went from strength to strength. A penultimate last game of the 2009/10 season saw Crouch net a late winner in a 1-0 victory over the vastly, financially superior Manchester City. Spurs had reached the promised land of the Champions League. The good times were ‘back’ at White Hart Lane. The following season Spurs enthralled their fans in Europe by beating both Milan clubs, Inter and AC. Luka Modric and Gareth Bale put themselves in the spotlight with dazzling displays. A great time to be a Spurs fan.

After being unceremoniously dumped out of by Real Madrid, Spurs petered out towards the end of the season with the club finishing fifth and missing out on another glamorous European adventure. A few murmurs from the fans resulted in Redknapp’s first faux pas. ‘They shouldn’t be complaining. They’ve never had it so good’. Were the fans spoilt? After all, fourth and fifth place finishes in successive seasons is a very good achievement for a club that has generally finished in mid-table positions since the inception of the Premier League in 1992-93.

The following season, things got even better. By January, Spurs were flying. Lying third and six points off the top, optimistic whispers of a title challenge became confident broadcasts. Spurs were the real deal. The pre-season objective of finishing in the top four was realigned to finishing in the top-three, finishing third as a worst case scenario. An unthinkable target after the first two games of the season plus the Modric transfer saga in the summer. But then two things happened, firstly Harry went to Southwark Crown Court for his tax trial and less than 24 hours after his acquittal, Fabio Capello gave the FA the finger. The nation made its mind up in swift fashion, Harry for England.

For Spurs, it sent their season into freefall. It started with an embarrassing, 5-2, hiding at the hands of Arsenal after Spurs were 2-0 to the good. Consecutive losses to Manchester United and Everton were tough, but then came defeats to newly promoted Norwich and QPR. Redknapp’s tactical skills and a lack of a ‘Plan B’ were called into question. The fans chanted at Loftus Road ‘Gareth Bale – he plays on the left; Aaron Lennon – he plays on the right’ in reference to the frequent switching of the flanks which was largely fruitless throughout the season. Four wins out of their final 13 games meant that Spurs fell away in spectacular fashion and to compound the misery, they were humiliated, 5-1, in the FA Cup semi-final against Chelsea at Wembley. Redknapp constantly denied that speculation linking him with the England job had affected the team. So with three games before the conclusion of the season, the FA offered the vacant job to Roy Hodgson, who accepted. Surprisingly Spurs’ form also improved as they took seven, from nine available points, to finish fourth. Definitely just a coincidence then… 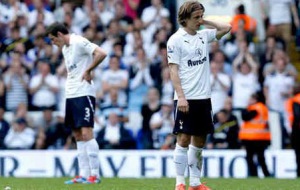 So all that stood in the way of Spurs and the Champions League was Chelsea, who faced Bayern Munich in the Champions League final – in Munich. The unthinkable happened and despite finishing fourth, Spurs now have to make do with Thursday night outings to obscure stadiums rather than the dazzling visits to the legendary San Siro and Bernabeu fortresses, as per 2009/10. 65 year-old Redknapp decided that it was then time to negotiate a new three-year deal and, in turn, inadvertently tied a noose around his neck by appointing Paul Stretford as his agent. Stretford, who also represents Wayne Rooney, was responsible for manufacturing a potential move for England’s number 10 to United’s neighbours City which only resulted in a bumper new contract for Rooney. Master of negotiations Stretford, decided to use the Chelsea vacancy as leverage to play hardball with the Spurs chairman.

Levy, who was grieving following his mother’s passing, was seething at Redknapp’s thoughtless comments last week, “The simple situation is I’ve got a year left on my contract. It’s up to Tottenham whether they want to extend that contract or not. If they don’t extend it and I go into my last year, it’s not an easy one when players know you’ve only got a year left.” Interesting that Redknapp felt that this, and not the earlier England speculation, would unsettle his players.

So last night it was crunch time and after much deliberation, Spurs officially announced Redknapp’s departure at 3.30am. Some could not believe what they were hearing. Spurs cannot do any better without Redknapp, were the rants. Redknapp had been classified as the best Spurs manager since, the undisputed number one, Bill Nicholson (coached the 1961 double side) but what were their ratings based on – three top-five finishes? Admittedly Redknapp had a 49% win ratio, more than any other Spurs coach in the Premier League era. But Terry Venables finished higher (1989 / 90 – 3rd place) and won an FA Cup. Martin Jol’s Spurs finished fifth twice and were a lasagne away from Champions League qualification. Even Juande Ramos and George Graham won trophies with Spurs. But league positions are more important than silverware these days due to the financial benefits and the prestige of the Champions League.

Had Redknapp stayed at Spurs, it would have been very difficult for him to match, let alone exceed, his recent achievements. Consider that the highest profile players to arrive to the club in the past two seasons, Rafael Van Der Vaart, Brad Freidel, William Gallas, Scott Parker and Louis Saha, will have an average age of 34 before Christmas. Meanwhile, Luka Modric is almost certain to leave, citing ambition as his reasoning and Bale may follow if the club receive a bid in the region of £50m. Without a shadow of a doubt, Spurs are very much indebted to Redknapp for the famous European nights plus the champagne football that has been played but his departure will not be as significant as some would like to think.

It should be noted that Spurs must have planned for life without Redknapp, months ago, on the assumption that he was going to be offered the England job and therefore once contract negotiations had become untenable, the Spurs board decided that Redknapp’s dismissal was a necessary measure.

So what now for Spurs? The club is in the final stages of constructing a state-of-the-art, £25 million training complex with 11 full-size pitches; there are plans to build a new stadium; plus three, consecutive, top five league finishes should make the White Hart Lane dugout an attractive proposition for most coaches.

David Moyes is the bookmakers favourite but Spurs do not need a younger version of George Graham. They do not need to become a team that is hard to beat, as their league form over the past three seasons as a testament to that. Roberto Martinez would be a poor choice as he would be over run in a dressing room consisting with so many strong personalities. Fabio Capello and Andre Villa Boas have been mentioned. The former has an outstanding club football CV but you would have to question his strict nature especially when compared to that of his predecessor. The latter is a gifted and very technical, young coach but his Chelsea experience has harmed his prospects.

The name that I would like to throw in the ring though is Martin Jol. Many thought that he never got a fair crack of the whip at Spurs and he has always retained a strong sense of affection for the club. Since he left Spurs, his coaching skills would have improved through successful spells with Ajax and Hamburg. If Levy wants to bring the Director of Football role back to Spurs, it needs to be with a head coach who has experience of coaching at a European level. Jol fits the bill but Levy is unlikely to make this a reality.