Today Greece votes on its future for a new government, which will mean either a catastrophic return to its native Drachma or stick with the existing and harsh austerity measures by remaining in the Euro.

Either way Greece is in desperate trouble. A nation with, notoriously, with the lowest suicide rate in Europe now has to deal with its proud citizens’ despair reflected in, now, the highest growing suicide rate in Europe. State benefits are non-existent, there is no government funding. People have lost their jobs and their homes. Doctors now, in many cases, treat patients and give them prescriptions for free.

It’s a dark time for Greece. Since 2004, when they became football and basketball European Champions plus hosted the world’s greatest sporting event – the Olympics, life in general has travelled in a downward spiral. On the pitch, Greece’s impressive and consistent qualification records for major tournaments had not been matched by their performances on the big stage – until last night in Warsaw.

The Greeks knew that only a victory against the heavy favourites Russia would be enough to see them qualify for the next round. They started with purpose with Kostas Katsouranis going close from a corner. The Russians soon settled into their rhythm and took the game to Greece. They had a considerable amount of possession of the game but the Greeks defended magnificently, something which was a necessity following their slow starts in their previous two games (against Poland and the Czech Republic). Andrei Arshavin, Alan Dzagoev and Yuri Zhirkov all went close for Dick Advocaat’s men. 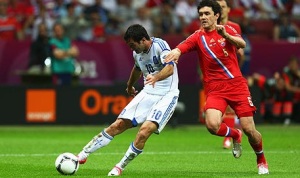 In first half stoppage time, the game was turned on its head. Greece captain, Giorgos Karagounis, equalling Greece’s all-time appearances record with his 120th cap, strode into the box following a Russian defensive error and powered a strike across Vyacheslav Malafeev into the bottom corner. The half-time whistle blew and the Greeks were celebrating as they walked down the tunnel as if they had already finished the match. At that stage the Russians were still going through as Poland and the Czechs were deadlocked at 0-0.

Credit where credit’s due as the Greeks came out in the second half with considerably more purpose than the first. Advocaat introduced Roman Pavlyuchenko at half-time but it was the Greeks who came closer to extending their league when Fanis Gekas failed to get to a Vassilis Torossidis cross.

Huge controversy at the hour mark. Karagounis demonstrated some fancy footwork to advance into the Russian penalty area, beating two players before clearly being clipped. A cast-iron penalty was not given and, unbelievably, the Greek captain was booked for diving (his second yellow in the tournament meaning he will miss the quarter-final). His reaction was as comical as it was understandable. No-one needed to be a Greek lip-reader to understand what was (or perhaps what was not) going on in Karagounis’ mind. Coach Fernando Santos, took the sensible decision to substitute him before he received a second yellow six minutes later. The patriotic Karagounis clutched the Greek badge on his chest as he walked off the pitch, remonstrating with the Turkish fourth official on the half-way line. This is the second, unwarranted suspension of a Greek player during the tournament yet Uefa are completely happy with their rule of no appeals. Incidentally, there is no mention of Karagounis’ yellow card for diving and Greece’s ‘penalty’ in Uefa’s match report. A fine example of independent journalism….

News then came from the Municipal Stadium in Wroclaw. Petr Jiracek put the Czechs into a 1-0 lead meaning the Czechs were now finishing top of the group and the Russians would be out. This made things even more desperate for the Russians who pressed further forward but were fragile on the counter-attack especially from the excellent Giorgios Samaras. Giorgos Tzavellas curled a powerful free-kick over the Russian wall crashing against the angle of post and crossbar. Greece were doing more than enough to hang on but hearts were in mouths late-on when Arshavin crossed in for Dzagoev who headed across the keeper, with the ball taking a lick of paint off the far post.

The Greeks held firm until full-time, grinding out a famous 1-0 victory – their first victory in the European Championship Finals since 2004 and they celebrated as if they had won the tournament. Russia, for all their entertaining football, were eliminated. The pro-Russian supporters would say that this result was harsh but Greece’s approach was no different to that of Chelsea’s this season in the Champions League.

Greece’s coach Fernando Santos was delighted, “We finally found this ingredient which is characteristic of our team, we had a clear plan, we had to be disciplined and we managed to see it through. From the first moment we were focused, we didn’t allow them opportunities to exploit their strengths.”

For Greece the result means that amongst the despair within the motherland, the locals finally have something to smile about. On Friday they will take on the winners of Group B, likely to be Germany. With the Greeks completely indebted to the Germans economically, they may just cause them a bout of anxiety on the pitch.