Tonight saw the completion of the Euro 2012 group phase. Each night there has been cliff-hangers followed by a lack of fingernails. The tournament has not disappointed thus far. From the 16 teams which started ten days ago, eight are now packing their bags and making their way home, whilst the remaining eight are extending their stay, gearing up to contest for the right to lift the Henri Delaunay trophy aloft on Sunday 1st July. Tomorrow night sees the first ‘rest’ night of Euro 2012 before the quarter-finals commence on Thursday. A chance to catch our breath and recount the drama of the last few days following Greece’s epic win over Russia on Saturday night.

Sadly, many fans’ second team, Holland, were eliminated after they lost a must-win game against a Cristiano Ronaldo inspired Portugal. It was a tall order for a lacklustre Dutch side. In response to their lethargic performance during the previous two defeats, coach Bert van Marwijk, approached the game with an all-out attack game plan by adding Klaas-Jan Huntelaar and Rafa Van Der Vaart to a starting line up which already consisted of Robin Van Persie, Arjen Robben and Wesley Sneijder.

If Holland had the right idea in theory, they applied it into practice for only 15 minutes of the match as Van Der Vaart curled the Dutch ahead with precision from outside the area. This fired the Portuguese into life, who equalised through their star man and skipper, Cristiano Ronaldo. From there on, there was only going to be one winner. The Dutch, for all their possession, looked soft whilst Portugal looked like they could score every time they attacked. The Portuguese were far hungrier for the ball and considerably more fluid with it. They played as a team which is exactly what Holland failed to do. Even the sometimes selfish Ronaldo looked to play his team mates through on goal rather than have a go himself. Responding to his recent criticism, the La Liga record-breaker delivered on the big stage, scoring two excellent goals to win the tie and send his country through to face Group A winners, the Czech Republic in the quarter-finals. Whilst Portugal seemed to have blossomed as the tournament has progressed, the same cannot be said about Holland. Should Van Marwijk be granted a stay of execution (he has a contract taking him beyond the 2014 World Cup) it would be an appropriate time for him to strip this sorry team apart, as per Laurent Blanc following the France fiasco of the 2010 World Cup.

Elsewhere in Group B, Germany did not have it all their own way against Denmark. Arsenal-bound, Lukas Podolski fired the Germans ahead with a trademark thunderbolt on his 100th international cap. Michael Krohn-Dehli then cancelled out the Germans lead and it was not until the 80th minute that Lars Bender, flying up the pitch on a counter-attack from the right back position, calmly side footed Mesut Ozil’s centre into the opposite corner, to book Germany’s place in the quarter-finals where they will face Group A surprise qualifiers Greece on Friday night. Certainly a grudge match considering the recent Euro economic crisis. The Greeks will require next to no motivation for this tie whilst the Germans, who have yet to be truly tested, will be deeply conscious that Greeks will not go away quietly and that this match is their European Cup Final.

In Group C, Spain and Italy extended their stays at the Euros. Spain, courtesy of a hard-fought 1-0 victory over Croatia, whilst the Italians made straight-forward work of the Irish, triumphing 2-0. Antonio Cassano and Mario Balotelli scored to secure victory for the Azzuri over their nemesis and highly decorated, Serie A manager, Giovanni Trapattoni.

Croatia defended for large amounts of the game against Spain but in the second half they created some excellent opportunities, largely thanks to Luka Modric who firmly put himself in the shop window with a midfield performance on a par of those regularly seen at the Bernabeu and the Camp Nou. The Spainish scored a fortuitous winner, through Jesus Navas, which had a hint of offside to it. Croatia, knowing that just an equaliser would have been enough to finish second and eliminate Italy, huffed and puffed but the Spanish goal was not breached. As an aside, Uefa’s criteria on determining the final group positions is laughable – from head to head records, through to Pythagoras and finally paper, rock, scissors before the all-important goal difference comes into play.

Spain now face France who finished second in Group D, after surprisingly losing to Sweden in their last game. The Swedes, fresh from licking their wounds in suffering early elimination, put in a huge performance resulting with a stunning volley from talisman Zlatan Ibrahimovic to lead 1-0. Sebastian Larsson extended their lead resulting in a 2-0 win. Not the best preparation for Laurent Blanc’s men before they face the World and defending European Champions. The final quarter-final is arguably the most mouth-watering. Italy will face an England side which grows in belief with every game. The English worked tirelessly for a 1-0 win over hosts Ukraine in Donetsk. Wayne Rooney, back from suspension, scored the only goal which was his first tournament goal since he dazzled for England as an 18 year-old in Euro 2004. Ukraine felt hard done by as they did have a shot which clearly went over the line and the goal was not given despite the presence of an official standing no less than ten feet away from John Terry’s heroic clearance (the assistant’s, assistant referee that is solely employed for goal line incidents – another black mark against Michele Platini) but replays showed that there was an offside in the build up to the goal which was not spotted. 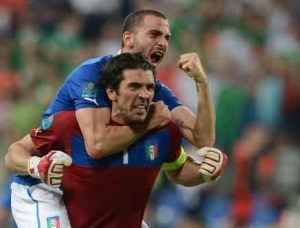 There is no doubt that England versus Italy will be an absolute cracker. Italy have been excellent during this tournament, with no signs of their notorious slow starts. They have played some great offensive football, continually opening up teams, including Spain. Andrea Pirlo has continued to roll back the years, picking up where he left off at Juventus whilst Antonio Di Natale continues to be a thorn for every team which he plays against. Throw in the erratic but sometimes incredible Balotelli and England face their toughest assignment since the 4-1 hammering at the hands of the Germans in South Africa two years ago. England, for their part, have turned themselves into a well-drilled unit under Hodgson and the timely return of Rooney seems to have galvanised the squad. Goals have been scored across the board with no less than five different goal scorers. With match-winners such as Theo Walcott and Alex Oxlade-Chamberlain ready to come off the bench and wreak havoc, Melosport picks this quarter-final as the most entertaining of the four.