Tonight’s match in Gdansk is not just a European Championships quarter-final. For the past three years, Greece has been financially crippled and been subjected to severe austerity measures, seemingly at Germany’s mercy. Upon learning that the New Democracy party had won Sunday’s general election, the German Finance Minister, Wolfgang Schaeuble, responded that “fiscal discipline is necessary” in a stone-cold, almost stereotypical, fashion.

‘Slaves versus Pay-Masters’ is how this match is generally perceived as across Europe and the world. The Greeks have not let the magnitude of the occasion affect their sense of humour as Live newspaper commented, “The referee should give Merkel a fright and toss a drachma coin at the beginning of the match.”

Economically, Greeks see little, to no light at the end of the tunnel. Things are beyond bleak and a proud nation, rich in its history, is made to feel inferior through German politicians who constantly insult them and dictate how they should live. This match therefore represents a somewhat unique opportunity of payback. The Greek players have already expressed how motivated they are for this match. Tonight’s performance is for the people – Patritha! Tension is likely to be high, both on and off the pitch.

Germany go into this game as heavy favourites. They have, after all, won 14 on the spin. They had a 100% record during their qualifying campaign, opening the scoring in every game. Previous winners of three European Championships and three World Cups, they are without a major since 1996 and many neutrals feel that Euro 2012 is Germany’s time.

In contrast Greece, in the finals of major tournaments, have generally finished bottom of their group, apart from the legendary year of 2004 when against all odds, they famously beat the hosts twice (Portugal), defending champions (France) and favourites (Czech Republic) in winning Euro 2004. Hellas have already surpassed expectations by upsetting a much-fancied Russian side in reaching the last eight. With many expecting nothing but a heavy German victory, there will never be a more appropriate time for the Greeks to stand up and be counted – in a sporting arena. Victory tonight would be even more significant than the tournament win eight years ago.

The lasting Greek / Adidas legacy from 2004 was that impossible is nothing. 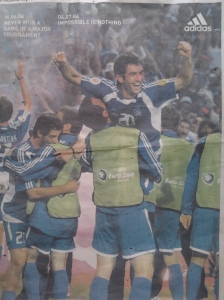