After toiling for 120 minutes, England found themselves in well-known territory – the lottery of the penalty shoot-out. Barely ten minutes later and there was a familiar outcome with the Three Lions dumped out of another major tournament. Seven penalty shootouts since 1990, with a measly record of one win and six defeats. 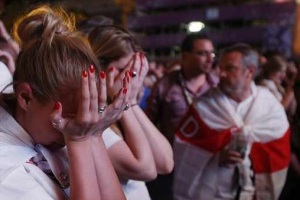 Alan Hansen et al salivated at how great Andrea Pirlo was for Italy last night, after all, he had ripped England apart time and time again. Or had he? Pirlo did indeed pass more and touch the ball more often (almost double the amount of times than Scott Parker and Steven Gerrard did combined) than his English counterparts. That exquisite penalty topped off the night. However if the truth be told, England were far from ripped apart. Pirlo was given space to pick up the ball off his centre backs in his own half but England defended resolutely. Two rigid banks of four, superbly marshalled by the skipper Steven Gerrard and the excellent John Terry. Yes, Italy had 20 attempts on target compared to England’s four but Joe Hart was at full stretch only twice in the entire 120 minutes. First from a wonder strike from Daniele De Rossi inside the opening three minutes which crashed against a post and then from an Alessandro Diamanti cross which evaded all of its intended recipients before connecting with the woodwork and bouncing away to safety.

Certainly Italy dominated possession and asked the questions but in terms of clear-cut chances England also had their moments, most notably through Wayne Rooney and Danny Wellbeck. Did England deserve to lose this match because they defended? Did Italy deserve to win even though their forwards demonstrated a distinct lack of composure in front of goal? Not at all. England lost on penalties yet some write that England were hammered 0-0. Taking Greece and Chelsea as clear-cut examples, this is completely unacceptable. The English press wrote how heroic Chelsea were in becoming Champions of Europe, and how organised the Greeks were in 2004, yet the knives always come out whenever England is concerned.

This is England’s major downfall – the media. There’s no inbetween. England are either expected to win every major tournament or they suddenly become over-achievers by qualifying for the knockout rounds. Consider the following: England are a top ten team in the world according to the FIFA rankings and their final eight appearance in the Euros represents a par achievement if you take into consideration both their ranking and their results over the past 25 years. However at the same time, arguably lesser nations have performed better. Since England’s last semi-final appearance in 1996, Croatia, Turkey, South Korea, Czech Republic, Greece, Russia and Uruguay have all, at least, got to the semi-finals of a major tournament.

Spare a thought for the likes of Steven Gerrard, Ashley Cole and Wayne Rooney. Three world-class players playing in a top ten team who have always been on a plane home before the semi-finals. An even more alarming statistic is that England have never beaten a ‘major’ footballing nation in the knockout rounds of a major tournament on foreign shores. Unbelievable.

What is the key factor in this? In keeping precedent with the entire tournament, last night, England were poor at keeping the ball. “Retaining possession is key at this level” said a smug Hansen, who had conveniently forgotten that Greece won the Euros eight years ago by doing the polar opposite whilst Chelsea won last season’s Champions League in a similar manner.

Again, the point should be reiterated that Italy were the better team on the night but the bottom line is that England kept Italy scoreless for 120 minutes and could have won the game with better decision-making in the final third. As per Cesare Prandelli, Italy were well aware of the considerable threat England posed on the counter-attack. However substitute Theo Walcott had one hour (including extra-time) to demonstrate his pace but fell short of expectations by constantly wanting the ball at his feet rather than in space, meanwhile the Ox, was kept seated on the bench. Could the missing ingredient be decision-making or even common sense? These players perform week in, week out for their teams in the Premiership but once they throw that famous white jersey on, they freeze.

After extra-time, came relief. You can hear Gandolf in the dressing room, “you shall not pass!”. Mission accomplished it seemed. Get them to penalties and everything will be fine. A 50:50 chance one would think. Not in England and even when Riccardo Montolivo missed his spot kick at 2-1 England, no-one really believed it was possible. Ashley Young, with slumped shoulders, banged the bar from 12 yards to immediately justify the nation’s fears. From there on there was only one winner and it was not going to be England.

With hindsight, England should be pleased that they played four games (two against top opposition and one against the tournament hosts) and remained undefeated. Penalties have always been and always will be, a lottery. As Hodgson rightly pointed out, “We practised penalties throughout the tournament but you really cant re-create the pressure and the heavy legs.”

Hodgson has the right to be extremely satisfied with his first tournament as England boss. England’s performances have represented a platform that the players and coaching staff can build on. Hodgson took the brave step of omitting Rio Ferdinand and now should look at doing the same to the likes of Terry, Scott Parker and Frank Lampard. All good players but at the wrong side of 30, they are not England’s future, especially when the next tournament is now two years away. Gerrard should be given an exemption following his excellent performances as skipper. England needs him. Fitness permitting, Tom Cleverley and Jack Wilshire, the latter being an ideal candidate to becoming England’s long term captain, should now become the lynchpin of the England engine room. Throw-in Gerrard’s experience and this move would go a long way in solving the problem of ball retention. Gary Cahill is a like for like replacement for John Terry, whilst you can choose one from Joleon Lescott, Phil Jagielka and Michael Dawson as a more than capable defensive partner. Add Rooney and Joe Hart to the mix and there’s a very strong spine for a future England side.

It’s been a good tournament thus far and last night’s match was as entertaining as scoreless draws can get. England will fly home bemoaning their luck with another penalty shoot-out defeat but the reality is they did ok. No more, no less. Time to move on – Hodgson must add to his brave decisions in building towards Brazil 2014.