After Alan Shearer commented that England ‘had no chance of winning the next world cup’, mainly due to the fact that in his mind the Italians had completely dominated England in the quarter-final, Italy went on to comprehensively beat heavy favourites Germany 2-1 last night with the game seemingly dead and buried after Mario Balotelli’s thunderbolt on 36 minutes. As an aside, I doubt that even the most optimistic England fans were expecting a Trafalgar Square, open-top, bus parade in early July 2014 following the Brazilian World Cup before Shearer’s comments.

I digress. Of course, the statement about Germany being dead and buried after 36 minutes is nonsense. After all, many teams have comeback from 2-0 down. The most appropriate example being when England were 2-0 to the good against West Germany in the Mexican 1970 World Cup before Gerd Muller inspired them to a 3-2 comeback win. Italy are not England though. Contrary to popular belief, they are not the founders of Catenaccio either but they are certainly the best at applying the theory into practice. Over the years Italian football has forged its success on miserly defences. It would therefore be fair to assume that at half-time yesterday the neutrals gave Germany little chance of getting back into the game. At 2-0 up, the Italians did what they do best and defended with all their expertise. Cesare Prandelli should take some plaudits as, tactically, they were excellent, orchestrated perfectly by the ever impressive Andrea Pirlo. Importantly, they fought for each other which was evident with regular volleyball-like, handslaps everytime they made an intervention. They won tackles, they battled in the air and they killed the game when they needed to. 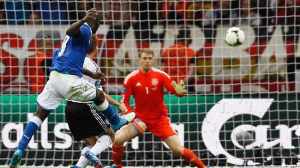 If their defending was good, then Mario Balotelli’s performance was sublime. Throughout his career, Balotelli has always been a controversial character. From being categorised as ‘unmanageable’ by one of the best coaches of all-time, Jose Mourinho, whilst at Internazionale, he found global fame following a lucrative move to Manchester City. Mourinho can certainly sympathise with City boss Roberto Mancini who evidently aged, as last season unfolded, as Balotelli would go from being Super Mario one week to problem child the next.

Balotelli is without doubt a footballing enigma. Supremely talented yet no manager has been able to truly harness the fantastic ability which he possesses. For all of Italy’s hard, collective graft against Germany, the night, rightfully, belonged to Balotelli. Italy’s opening goal on 20 minutes came from a bout of telepathy between Balotelli and his strike partner Antonio Cassano. Cassano, who returned to play international football at this tournament after suffering a stroke just eight months ago, turned Mats Hummels with ease before casually whipping a left footed inswinging cross into the German penalty area. Balotelli anticipated the cross, spun away from his marker and planted his header beyond the wrong footed Neuer. Then 16 minutes later, Italy were in dreamland. On the counter attack following a German corner, Riccardo Montolivo galloped 30 yards with the ball before picking out Balotelli who timed his run to perfection, beating the offside trap. He charged towards goal and hammered a right foot shot past Neuer who was rooted on one knee. Cue the celebrations.

Germany halved the deficit in full time injury-time through Ozil’s penalty but midway through the second half it was evident that the victors would be whose wearing blue. Their players and fans were distraut at the final whistle. Since 2006 Germany have consistently finished in the last four at major tournaments but surprisingly they lack the old German mentality of closing out tournaments. The much-celebrated current crop of players may now have doubts as to whether they will ever get their hands on silverware considering that the next tournament will be held in South America as history shows that only South American teams have been victorious when the World Cup has been held across the Atlantic. 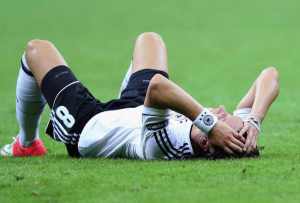 Speaking of history, before Thursday’s semi-final much had been made regarding the fact that Germany had never beaten Italy at a major tournament. Now the attention turns to Spain. The Spaniards are 90 minutes away from creating a footballing legacy – by becoming the first ever country to win three successive tournaments. However Italy, who Spain have not beaten in 90 minutes of competitive football since 1920, stand in their way.