Euro 2012 reaches its climax in Kiev on Sunday night. Fittingly, the last two nations to have won major tournaments in the last six years come face to face to decide who will become European Champions. The defending European champions and 2010 World Cup winners, Spain, take on 2006 World Cup winners, Italy.

Spain are on the verge of creating history. A win over the Italians would see them immortalised as the first nation to win three successive major tournaments. Germany, in 1976, were a whisker away but they were outdone on penalties against the Czech Republic, on a night when the ‘Panenka’ penalty technique was born.

Going into Euro 2012, Spain were heavy favourites but their form has somewhat deteriorated as they have progressed through the championships. In contrast, the Azzuri have grown since they met Spain three weeks ago in Gdansk for their opening Group C fixture. Italy surprisingly carved out a few openings before Antonio Di Natale put them ahead. Spain continued with their patient, possession game and Cesc Fabregas equalised late on. Since then, both teams drew with Croatia and beat Ireland.

In the knock-out rounds, England pushed Italy all the way to penalties before Mario Balotelli won the Italian fans over against Germany, by doubling-striking his adopted Italy to the Euro 2012 final. Credit to coach Cesare Prandelli, who has played to this team’s strengths. Defending resolutely when called upon to so do and attacking with flair when the opportunities have arisen. He has tinkered with formations when necessary, plus he has created a formidable front-line partnership in Balotelli and Cassano. “Even in qualifying we tried to play using the strengths of our players. We’ve risked a little in this approach as it’s a difficult route to take, but we need to continue down the same path because it will eventually bear fruit,” said the former boss of Parma, Roma and Fiorentina. The backbone of his team has been formed by this season’s Scudetto winning and undefeated Juventus side, orchestrated by the evergreen Andrea Pirlo, who amazingly left Milan last summer on a free transfer and joined the Bianconeri. If Italy beat Spain on Sunday night, Pirlo would become the outstanding candidate to win Ballon d’Or. 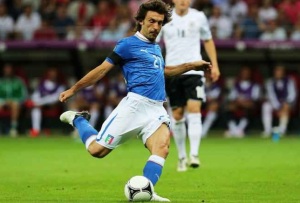 Whilst some praise the Italians for playing positive football and turning the English and the Germans over, Spain have bewildered their followers by playing, at times, with no recognised striker and six midfielders – the ‘false number nine’ approach. These critics should take a trip down memory lane to see that the nation’s most successful team, Real Madrid, were at their most dominant during the Alfredo Di Stefano era – which very much incorporated a false nine tactic. However, by comparison to the Italians, Spain stuttered past a muted France side (unfortunately this state of mute did not apply to post match interviews) in the quarter-finals and beat a Portuguese side that fluffed its lines, on penalties in the semi-final.

Nevertheless, Spain’s coach Vicente Del Bosque, remains upbeat and feels that Spain deserve to win on Sunday night due to the effort they have put in over the last four years. “We’ve worked very hard for many years and we’d like victory to crown that work.” However, he admits that Italy represents a clear threat to their ambitions “there’s not a great difference between the teams.” Looking at the statistics, Italy have been the busier of the two with 97 attempts on goal compared to Spain’s 78. That said, Spain’s conversion rate is 10% compared to Italy’s 6%.

There are ominous signs for Spain, in that Italy are probably the toughest opposition possible to come up against in the final. Spain have not beaten Italy in a competitive 90 minutes since 1920, although they did beat the Italians on penalties, on route to winning Euro 2008. Also, Italy halted Spain’s consecutive, 14 match, winning streak, which also coincided with the last time that Spain conceeded a goal (in their Group C 1-1 encounter). Furthermore, when Germany beat Greece in the quarter-finals, they set a world record by winning 15 consecutive games. Next round – they lost to Italy. And one more thing, when Italian football was last savaged by match-fixing scandals in 2006, the Italians put in a great display of unity by winning the World Cup.

However, let’s not deflect too much attention away from the Spanish – the inventors of the beloved tiki-taka. Xavi, Casillas, Iniesta, Fabregas, Alonso, Ramos, Silva, Pique, Torres – there is class all over the pitch. Although they have not been at their best, Spain have made it to the final – a trait of a true champion. On Sunday, they will face their toughest assignment this summer, and possibly to date, but Del Bosque will rally his troops for one last hurrah. Motivating a group who are on the cusp of immortality should not be too difficult.

INTERESTING STATISTICS FOR THE FINAL