Immortals Spain save their best for last

Great sportsmen and teams are often defined by the very moments when they have to summon all their reserves to deliver at the biggest stage against all odds. In 1974, Muhammad Ali was peppered for the best part of seven rounds by the bigger and stronger George Foreman, who was renowned for his ferocious punching power. Ali weathered the storm, zapped all of Foreman’s energy and delivered a sequence of Ali-lightning combinations to send the big man down. Foreman rose from the canvas too late, handing Ali a seemingly, impossible victory to regain his heavyweight championship. That night Muhammad Ali demonstrated that not only did he possess the ability to take a punch but also highlighted his tactical genius.

Before Sunday’s final kicked off in Kiev all the talk was on Italy and Andrea Pirlo. The Spaniards were still the bookmakers favourites but Italy had certainly made up ground on the World Champions, especially after despatching the Germans with ease in their semi-final victory. Spain, in contrast, could not score against Portugal and were not tested by French in the quarter-finals. Although Spain were not getting an Ali-esque pounding, it did not stop critics eager, all of a sudden, to find faults with a team on the verge of creating history. Going into the final, some inexplicably tagged Spain as ‘boring’. Whether or not this ridiculous statement was manufactured by the media to sell papers remains to be seen.

Statistics do show that Spain retained more possession in Euro 2012 compared to the 2010 World Cup and the 2008 Euros, but their attempts on goal had reduced. Alan Shearer, in all his wisdom, questioned the setup of not having a centre forward, showing a zonal analysis of their match previous – “I would be standing here…” thought Alan, in reference to the ‘false-nine’ tactic.

In response to the goading, Spain brought their A-game to the table plus interest. They delivered a first half performance which defied belief. Even their notoriously excellent passing skills exceeded expectations as they went for the jugular. They understood the significance of the next 90 minutes. Having an off-day on the biggest stage in Kiev was not an option. The statistics of having not beaten Italy, in 90 competitive minutes since 1920, meant absolutely nothing to them. From the first whistle, they attacked at will and carved the Italians open. Whenever the Azzuri had the ball they were mobbed as if they had just disrupted a bee-hive. Italy, to their credit, did not sit back as they constructed their own attacks, but Sergio Ramos and Gerard Pirque were at their best, limiting any kind of opportunities for Mario Balotelli and Antonio Cassano. Then, at 1-0 down, Italy lost probably their best defender of the tournament – Giorgio Chiellini – through injury. Although Spain were in the ascendency, Italy were only trailing by a solitary goal but five minutes before half-time La Roja scored a goal which should be replayed to youngsters time and time again. Surprisingly, prior to the match, little praise had been reserved for Xavi. Do the pundits have short memories? Xavi has been in the top three for Ballon d’Or in the last two years. All the talk was on Pirlo and how Xavi stole the limelight. Xavi five minutes before the break picked up the ball and played as good a through ball that you will ever see. The timing and pace of the pass was perfection, but Barcelona team-mate in-waiting Jordi Alba should be given a hefty pat on the back for the sprint, touch and calm finish which followed.

Xavi’s next assist aided Fernando Torres in creating his own bit of history. The Chelsea forward has endured a wretched past couple of years infront of goal, compared to his usual high standards at Liverpool and Athletico, but after last night’s goal, he became the first player to score in two European Championship finals. Chelsea team-mate Juan Mata added a fourth. 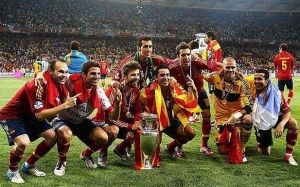 Italy’s task was made all the more difficult with another injury after 60 minutes to third substitute, Thiago Motta, reducing the Italians to ten men with half an hour to play with the score 2-0. In that time they visibly tired and had little left in the tank. The 3rd and 4th Spanish goals were a little harsh on Italy but perhaps for Le Roja, it was payback from when Milan humiliated Barcelona 4-0 in the Champions League final in Athens in 1994. Del Bosque attributed Spain’s success to a “great generation of footballers”. Iker Casillas hit the nail on the head “When we’re retired in 10 or 15 years then maybe we can look back and say we were really good.”

Aside from licking their wounds, even Italian fans have to acknowledge what was witnessed on Sunday. Spain by winning a third, major, consecutive tournament – and more so, the manner in which they did it – earn the right to call themselves the best team of all-time. Of course there will always be those who disagree but the evidence to back up this claim is compelling. Three in a row has never been accomplished. West Germany were very close in 1976 and that was a team which contained the legendary Franz Beckenbaur and Gerd Muller. South American teams have also come close but no cigar. It is an extraordinary feat for a team to win three consecutive major tournaments. Spain were lucky in the sense that they had no significant injuries during the tournament. Yes, Carlos Puyol and David Villa (both influencial players) were injured before the tournament started but the backbone of Casillas, Ramos, Pique, Iniesta and Xavi were ever-present and fit, but then again, you need a bit of luck.

Vicente Del Bosque knew exactly what he was doing by taking Xavi and Iniesta off midway through the second half in Spain’s earlier matches. They were kept fresh for epic finale. Pirlo, by contrast, ran out of gas. Del Bosque almost employed Ali’s ‘rope-a-dope’ tactic on Foreman where he would lean back on the ropes, take Foreman’s onslaught and then tie him up whispering in his ear, “George is that the best that you’ve got?” 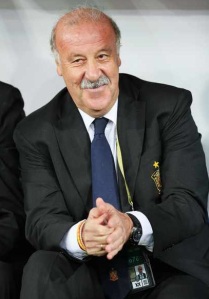 I was not even born when the Rumble in the Jungle took place in 1974 but it’s an epic part of boxing’s history. Something which you feel obliged to know about because of its significance to the sport. It was arguably the greatest moment for the greatest ever boxer. For Spain, their moment was in Kiev on Sunday and it has been a pleasure to watch their journey.