London 2012 Olympics – Who will be crowned fastest man on Earth?

With one week until the Olympics Opening Ceremony – Melosport is highlighting the most anticipated battles during the next few weeks. Today we look at the Men’s 100m sprint.

This time last year Usain Bolt would have been considered a runaway favourite (pardon the pun) for a 100m / 200m Olympic double – and with good reason. However, his disqualification in the 100m World Championships final in Daegu resulted in the global introduction of Yohan Blake. The young Jamaican has not looked back since his gold medal in South Korea.

On Tuesday, Blake put in another decent shift at the office. The 21 year-old won the 100m at Lucerne, recording his third fastest time of the year at 9.85s. He was helped by a 1.6m/s tailwind but nonetheless the Jamaican is in excellent form. He set the fastest 100m of the year at 9.75s – setting a personal best in the process – in winning the Jamaican Olympic trials. He also won the 200m, beating the defending Olympic champion and world record holder, Bolt, into second place on both occasions. To further strengthen his Olympic credentials, Blake is also the owner of the second fastest 200m ever achieved (19.26s in Brussels in 2011).

Following Bolt’s setback at the Olympic trials he immediately flew to distinguished sports doctor Hans-Wilhelm Müller-Wohlfahrt in Munich for treatment on his troublesome muscle tightness. Since the visit, Bolt has declared that he is ‘good to go’. Although form favours Blake, Bolt understandably is shading the betting money at 2/1, with Blake a very close 3/1.

Perhaps a little unfairly, Tyson Gay, the third favourite, is out at almost 18/1 to claim Olympic 100m gold. With the media already diminishing USA’s sprinting prospects, there is little doubt that Gay and, Athens Olympic gold medalist Justin Gatlin, will prove strong competition to the dynamic Jamaican duo. Gay’s personal best at 9.69s, is second only to Bolt’s 9.58s world record and with an unprecedented last few months injury-free, Gay is relishing the challenge. “It’s so open” he said following a win at a rain-soaked Paris last Friday, in a time of 9.99s beating compatriot and former drug cheat Gatlin. Gatlin, the winner of the US trials, has already clocked 9.80s this season. Asafa Powell seems to be yesterday’s man as Bolt and Blake take all the Jamaican plaudits but it is worth noting that he has run 9.85s this season. 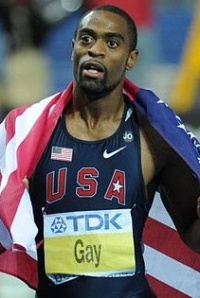 With so many fine sprinters already firing on all cylinders, there could just be an upset on the cards come Sunday 5th August.