One of Britain’s best gold medal chances in track and field rests on Mo Farah’s slender shoulders. The reigning 5,000m world champion, plus 10,000m runner-up, knows that he has a reasonable chance of achieving an extremely unlikely British feat, in winning both 5,000m and 10,000m Olympic gold medals at London 2012.

In 2011, Somalian-born Farah became the first Briton to win a World Championship gold in either 5,000m or 10,000m events. As recently as the European Championships in June, Farah was ranked number one in the world, after adding the European title to his medal cabinet. Following the recent Paris Diamond League grand prix, he slipped down to 11th place in the rankings, as six men ran faster than Farah’s 5,000m Personal Best in that race alone.

The Brit, though, remains upbeat. By making reference that pace makers, frequently used in the diamond league meets, do not take part in the Olympics, Farah said, “Olympics are very tactical, that was a Diamond League race, well-paced; a championship is completely different.”

Farah’s strongest competition comes in the form of Ethiopia’s world-record holder Kenenisa Behele. The 30 year-old will be defending his 5,000m and 10,000m Olympic titles in what is likely to be his last Olympics. With a glittering career of 20 gold medals from Olympics and World Championships, Farah will be aware that the distinguished Ethiopian has a wealth of experience at his disposal, plus a younger brother, Tariku, who finds himself third favourite for the 10,000m. 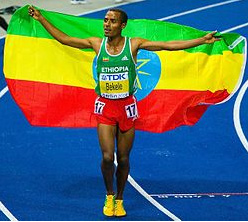