Yesterday, David Rudisha set the first track and field world record of the London 2012 Olympics – in the 800 metres. It was a phenomenal race which, unfortunately, took place during the same evening session as the 200m Bolt show. The term unfortunate is used because Rudisha’s achievement, and it’s incredible snowball effect on all of the other 800m finalists, was simply breathtaking but it was overshadowed by Bolt’s historical feat.

The Kenyan’s 800m run was scintillating. His two laps of the Olympic stadium were, in middle distance terms, blistering. With approximately 200m gone, Rudisha kicked, with only two things on his mind. 1) Olympic gold and 2) to break his own world record. He did both, winning in a time of 1m 40.91s. The first man to run under 1m 41s. What was so impressive about this race was that Rudisha’s pace prompted the entire field, bar one athlete, to record personal bests. 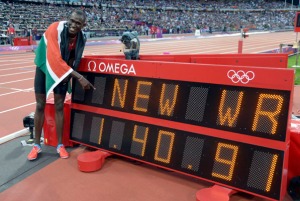 Amongst the record breakers was Team GB’s Andrew Osagie, who finished last in eighth position but, incredibly, his time of 1m 43.77s would have been enough to have won the last three 800m Olympic finals. Lord Coe, himself an 800m master back in the day, said of Rudisha’s performance, “he is the most impressive track and field athlete at these Games”.

Elsewhere, USA’s Ashton Eaton comfortably won the men’s decathlon with 8,869 points, finishing ahead of compatriot Trey Hardee and Cuba’s Leonel Suarez. Christian Taylor and Will Claye made it a 1-2 for USA in the men’s triple jump final and Italy’s Fabrizio Donato took the bronze.

Today, Australia’s Steve Hooker hopes to defend his Olympic pole vault title. Australia had a poor first week at the Olympics but have now won enough golds to earn a top 10 spot in the medals table. Hooker will be hoping to emulate Sally Pearson and win Australia’s second gold in track and field.

This evening sees two relay finals. The women’s 4x100m could see the end of one of the oldest track and field world records. The USA were in superb form in the heats yesterday, posing a serious threat to the 27 year-old world record (41.37s) and the 32 year-old Olympic record (41.60s) set at the 1980 Moscow Games – both records were set by East Germany.

In the men’s 4x400m relay, all eyes will be on the ‘blade runner’ Oscar Pistorius. Pistorius, the first paralympic athlete to compete in able-bodied meets, progressed as far as the semi-finals of the individual 400m. South Africa yesterday successfully appealed their elimination in the heats as Ofentse Mogawane was ruled to have been blocked and knocked over during the heat, meaning Pistorius will, amazingly, be competing in his first Olympic final. He has been at the centre of controversy, as some athletes claim that his prosthetics give him an unfair advantage. Whilst there is still no significant evidence to prove or dismiss these claims, we should still marvel at the will and drive that this truly, inspirational, human-being possesses – a fantastic advertisement in the power of sport. 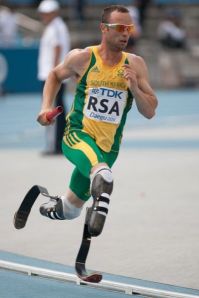