The Olympic hangover is aided by the Premiership’s return

Three months after Sergio Aguero won the title for Manchester City in late, dramatic fashion at Etihad stadium, the Premiership returned last weekend. There were those, up and down the country who, before the weekend at least, were still locked in a deep Olympics depression.

Before the new Premiership season kicked-off, some newspapers battered the vastly over-paid, ungracious and arrogant football stars. Olympic athletes, and in particular Team GB’s, had grabbed the nation’s attention for all the right reasons. Their unflinching and uncompromising, determined pursuit of excellence, whilst demonstrating an abundance of humility was just some of the many refreshing qualities witnessed. So inevitably, it became only a matter of time before the football-bashing began. 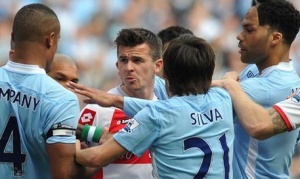 Michael Owen, for one, was bewildered. He tweeted that he was struggling to understand society’s low opinion on footballers. He argued that it was only a minority of footballers who have given the beautiful game negative publicity. Fair point. However, please excuse me while I piece myself back together after laughing myself silly, as Owen, at the same time of making this comment, was a) having a jolly good chin-wag with Joey Barton (currently serving a 12 game ban following his last game of the season antics) and b) was, and still is, desperately seeking new employers to fund an unworthy lucrative contract following his 30 appearances in three seasons at Manchester United. Enough said. One could happily jump on this football versus Olympics bandwagon but its all rather tedious, littered with variables and is therefore largely pointless.

Admittedly, I adopted the fickle, ‘football just doesn’t compare’ mentality during the Olympics as I was completely mesmerised at this truly iconic London 2012 event. But then last week, I was copied in on an email mentioning fantasy football which got the juices flowing and when the sunlight caught my eye through the blinds on Saturday morning – whisper it – I felt a slight tinge of excitement. A visit to nearby Craven Cottage with the syndicate season ticket was only a matter of hours away.

The best thing about the first day of the season is that it is generally a day riddled with anomalies. There’s no form guide, so anything can happen and this weekend did not break that trend.

We found our seats, around 10-15 rows up from the corner flag, next to the Thames. Thankfully, on a 30 degree day, we were in the shade. The pitch looked immaculate with the fans in fine voice. Five Fulham players readied themselves for action with shooting practice. Important note: I wish for no-one to ever be in the path of a John Arne Riise strike. WMD.

When I wasn’t taking cover, I would marvel at the visiting fans. Huddled together, wearing their banana yellow replica tops, looking very much like their nickname – the Canaries. Norwich were the visitors and despite setting the early tempo, Martin Jol’s men played them off the park, dishing out a thorough 5-0 hiding, ensuring the away fans endured a miserable marathon of a journey back home in the sweltering heat. Damien Duff, the experienced Irish campaigner, opened the scoring, whilst Mladen Petric, the new signing from Hamburg, grabbed a brace. Another debutant, Alex Kacaniklic also scored, whilst substitute Steve Sidwell capped off the scoring from the spot. The Fulham fans taunted their opposite number singing, “We are top of the league”. Fair assumption. There couldn’t possibly have been another winning margin like that –  surely….

As the other results came through, another 5-0 hammering. This time Swansea were the beneficiaries, enjoying a great day in the West London sun putting, much-fancied to be top 10 finishers, QPR to the sword. New signing Michu and Nathan Dyer, both bagged two goals a piece to leave the QPR faithfully wondering what had hit them. Scott Sinclair completed the rout. QPR Manager Mark Hughes was understandably frustrated but boldly decided that the result could be the making of QPR this season. Will that come back to haunt him?

Brenden Rogers flew the Swansea nest in the summer, joining Liverpool. There was considerable anticipation for this first game in charge and it yielded three goals but none in his favour as Reds were comprehensively beaten 3-0 by West Brom – now managed by Steve Clarke – ironically Liverpool’s assistant coach last season. Uruguayan Luis Suarez spear-headed Liverpool’s attack but had a day to forget with no less than five decent opportunities spurned. You would think unlucky – another day another outcome, but actually maybe not, as Liverpool topped last season’s most wayward attempts at goal with 283. After Saturday, there’s only 276 to go.

At the Emirates, the Van Persie-less Arsenal huffed and puffed but could not break Sunderland down. The Black Cats were good value for their scoreless draw with a committed team effort. It must be said though that Santi Carzola looks to be an astute signing by Arsene Wenger as he looked extremely lively. However, after the full-time whistle, the gaffer was caught muttering in French and wild gesticulating about a missing boy who lived used to live nearby, scoring 30 league goals in 38 games last season.

Further across the capital, the shaven head and illiteracy rates spiked at Upton Park as West Ham celebrated their return to the ‘big time’ with a 1-0 win over hapless Aston Villa. Fans favourite Kevin Nolan netted the only goal of the team.

Meanwhile, new Spurs coach Andre Villas Boas, drove the team bus all the way to Newcastle to demonstrate his vast array of talent to the infamously, difficult-to-please, Lillywhite hard man, Daniel Levy. Spurs’ hit the woodwork twice in the first half and before you could say, ‘they might regret that’ – they did, as Demba Ba scored his first goal since February to put the Magpies ahead. Jermain Defoe, following up his wonder strike for England during the previous week, equalised only for Aaron Lennon and Rafael Van Der Vaart to double-team Ben Arfa in the box. The Frenchman stepped up, sending Brad Friedel the wrong way to secure the three points. This also extended Friedel’s unwanted record as the least successful Premiership goal keeper from the spot, as he is yet to save a penalty in his last 18 Premiership attempts. 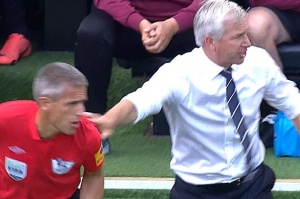 Comically, Newcastle manager, Alan Pardew, asked his players to embrace the Olympic spirit this season. He led by example by trying to thump a linesman when Gareth Bale was ruled to have kept the ball in play, much to Pardew’s dissatisfaction. He was sent to the stands with his tail in-between his legs and now awaits further news to see if he faces a further ban.

On Sunday, Eden Hazard displayed the touch and guile of a sure-fire Premiership star. The Belgian French player of the year created both Chelsea goals in the first seven minutes of his debut against Wigan. What was most impressive about Hazard were the amount of times he was dropped by hefty Wigan challenges but rather than roll around in agony, he just got up and carried on. Early call, but we may well have the new star of the Premiership.

Manchester City carried on where they left off, with a come-from-behind victory to secure all three points. Sergio Aguero was stretchered off with a knee injury before the fun and games began. Fellow Argentine, Carlos Tevez, scored the first competitive goal of their campaign before Southampton turned the game on its head through hotshot Ricky Lambert and ex-Rangers midfielder Steven Davis. Southampton are everyone’s tips for the drop zone come May but, regardless of their fate, they are sure to win over a few fans this season with their freestyle attacking play. City struck back with Edin Dzeko and Samir Nasri ensuring that there would be no surprises at Etihad stadium.

On Monday, Robin Van Persie and Manchester United kicked off their campaign at Goodison Park. The Dutchman sat on the bench for two-thirds of the match and watched helplessly as the outstanding Marouane Fellaini tormented United’s defence. By the end of the game, Sir Alex Ferguson’s face had reddened a little more than usual after claiming that United should have won the game because Everton defended in the second half.

The opening weekend resulted in a bit of pushing and shoving, frequent complaints, a few moments of sublime individual skills, questionable defending, high scores and some surprising results. The Premiership is back.