Taking the lid off ‘Fight Night’ in inner-city London

Ask the average man on the street to sum up boxing and they envisage the bright lights of Las Vegas. They relive those epic fights between the likes of ‘Marvelous’ Marvin Hagler and Thomas ‘The Hitman’ Hearns. They picture the money team led by its frontrunner Floyd Mayweather Junior. They reminisce about a young Iron Mike Tyson who spectacularly destroyed every obstacle in his path. Older generations boast how they saw Ali in his prime – floating like a butterfly and stinging like a bee – before a debilitating disease ravaged his body. They all picture glamour, scantily clad ringside girls, dinner jackets and distinguished guests. If they think hard enough, they also think about corruption – Don King at this best and, above all, the sorry tales of boxers having blood clots removed from their brains just hours after a world title fight as per Gerald McClellan and Michael Watson.

However, not much is known about amateur or unlicenced boxing……

An old gym buddy of mine, Jeff Cohen, is an amateur boxer. Before last June, his record over six fights yielded three wins, two draws and a solitary defeat. Initially, Cohen was due to fight on 23rd June, but his opponent withdrew at the eleventh hour – sighting injury. This was a bitter pill to swallow given the tortuous hours of hard graft in the gym. However, a week later, Cohen accepted a late challenge amongst the murky surroundings of an old famous pocket of inner-city London. Fight night was very much on. 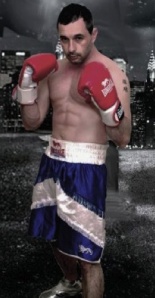 Out went an invitation via social media – corner men required. Since I had missed all of Jeff’s previous fights whilst residing Down Under, I was all over it like a donkey on a waffle. I assumed that my sole responsibility would be akin to taking charge of a bottle of water, and in my dream world, I’d be the member of the entourage holding the world title belt aloft as we marched into the ring. My happy place was a comfortable, million miles away from reality. I was the entire entourage.

“OK, who are fighting?” I asked. “Some Russian” replied Cohen. Since the only Russian boxer I knew was Ivan Drago, I wasn’t overly thrilled with the news. “He’s only fought once but he’s about 87kg” – six kilos heavier than Cohen (almost a stone). That is a sizeable difference.

On that Friday evening, I arrived to our destination earlier than planned. It gave me time to soak up the local sights. Rich with history, this particular part of London has become a rundown area and would not be out-of-place in an episode of The Wire. It looks, and feels, on edge. Dilapidated yet uncompromising tower blocks overwhelm the area. After a brief period of aimlessly wandering around, hoping to avoid a mugging, I spotted Cohen strolling out of the tube station with a bounce in his step. He was wearing his signature armchair headphones and threw the occasional right hook into the crisp, central London air. Ready for action.

We walked into the venue – an old rundown theatre converted into a bog-standard nightclub – which in turn, became a boxing arena for the night. Our bags were searched by security and then, of course, there’s a metal detector to walk through too. You could almost flashback the carnage witnessed here. We ventured off to find the changing rooms. Picture the scene, the changing rooms were a set of three, converted, old-school garages. We stood at the entrance and I thought back to the 1980s. Cars would have driven down the tiny alleyway which we were standing in and would proceed to make an improbable, tightest of tight, turns into an arched space with a ramp entry. All brick work, coated with a tin of paint. The concrete floor was carpeted and chairs were scattered by the room’s physical boundaries. There was an empty, central area, presumably assigned to the fighters for warming up before their bouts. No wash basins, no showers, no lockers. We looked around, “this cant be it”. It was. Brilliant.

We were on for fifth fight of the night, which gave us time to scan the venue. The first fight had started and, interestingly, headguards were not being worn by either fighter. Cohen and I had a puzzled look on our faces. The same face when you open your wallet and find nothing but receipts. This just wasn’t right.

We headed back out to the alleyway, which separated the main arena and the changing rooms and quizzed, what looked like to be, a guy officiating the evening. “Erm, excuse me mate, they’re not wearing head guards in there?” “Nah mate, its optional innit” came the reply. Following his Charlie Large response, I thought, at any second now, he might pull out a fake Tag from his back pocket and attempt to sell it to us. Fighting without a headguard represented a dilemma. It’s dangerous in a professional arena and the risks increase ten-fold elsewhere. Time would tell us that no fighters were taking the ‘option’, so we had a choice to make: fight without or go home.

The presence of the St John Ambulance was a slight comfort and a paramedic moseyed over in our direction to carry out Cohen’s ‘medical’. Any sense of reassurance soon evaporated  – within 20 seconds to be precise. A torch was shone into both eyes. The medic then asked the fighter if he had taken any drugs and checked his forearms for good measure. He then put his hand on his chest. “Breathe in for me please.” That was the entire medical. Unbelievable.

The running schedule was then inexplicably changed, pushing our fight to last. After much to-ing and fro-ing, we were pencilled back into fight five. Eventually, we met the opponent – Ogen Olehnovich. He and his brother were both fighting on the night. Well obviously not both at the same time, but then again, nothing would have surprised me.

Cohen warmed up and then shortly before the bout, donned his beloved QPR coloured trunks. Ready to rumble. Then came the anxious waiting time. We were soon called out and ventured from the alleyway to the ring, setting up camp in the blue corner. Although I had been to similar events before, it was the first time I had stepped into a boxing ring on fight night. You are met by beaming light from all angles and you can almost feel the heat from the bulbs. All you can see is the ring and very little outside of it. I was in a semi-daze, perhaps having another Hollywood moment.

In an instant, Jeff grabbed my attention by yelling “Sav! Mouthguard!!” moments before the opening bell. This is what happens when a total novice is in a fighter’s corner. I scrambled through my pockets and there it was – the mouthguard case. Now came the difficult bit, opening the box and wetting the thing, whilst 200 pairs of eyes are staring at you and probably tutting. I say probably because I couldn’t see! Ever generous with the water, I made a complete mess in our corner. The white shirted, bald, no-nonsense referee (wearing what looked like to be sandwich-making, blue plastic gloves) walked over and towelled the canvas dry with his foot. Unfortunately, there were no Rocky clichés from me, just a “Good luck Jeff!”

DING!! Three, two-minute rounds. In the first, Cohen started lively and was full of beans. Certainly the aggressor, he worked his way around the ring, throwing a high number of jabs at the Russian, who for his part, was static but regimentally kept his guard up. Cohen, being far busier, clearly won the round. The second round started where the first left off. Cohen again far busier, firing neat combinations at his opponent, expertly leading with the jab. Olehnovich sensed the urgency to start fighting and threw a number of haymakers which Cohen did well to manoeuvre away from. Another Cohen round in my unbiased book or at worst, a level round. Sitting onto his stool though, Cohen was visibly tired and breathing hard. His constant movement was taking its toll. It was not an appropriate time to make an Uncle Paulie comment like “hit the one in the middle.”

DING! The final round. All of the training went out of the window. With energy sources depleted, it was now a question of who wanted it the most. Credit to both fighters for gave it their all, but with minimal clean punches landed, it was difficult to pick a third round winner.

So, on my unofficial scorecard, I had a Cohen win and, at worst, a draw but the ring announcer declared the red corner to be the winner, meaning that Cohen’s seventh career fight ended with his second defeat. His record now stands as three wins, two draws and two defeats in seven fights. Not the result we wanted but, above all, we were happy to leave in one piece – with the experience being a real eye-opener.

Cohen now, after a solid six weeks of training, is the main event this evening at Wycombe Wanderers Football Club, on a night of white-collar boxing – ‘Warriors Collide’. Under the tutelage of his coach Stuart Scott, ‘Pretty Boy’ Cohen is confident of his fourth career win as he battles with Mark ‘TNT’ Tucker.