They were Jose Maria Olazabal’s defiant words on Saturday evening after Team Europe had ended Day 2 with a 10-6 deficit to the Americans in Illinois. The hosts, roared on by 50,000 home fans, fist pumped their way to what everyone thought was an unassailable lead.

The final day of the Ryder Cup is the singles competition and history tells us that the Americans generally come out on top. Any European comeback would be the greatest ever as the USA had never lost a more than a two point advantage going into the last day since 1927 – when the competition began. Europe had an extremely daunting but clear target. Eight points were required to retain the 39th Ryder Cup. By contrast, America only needed four and a half points from 12 singles matches to regain the trophy. 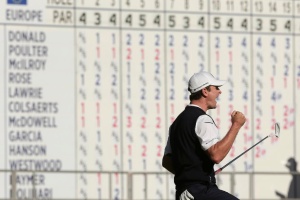 Inspiration was required and there was enthusiasm aplenty. The Spirit of Seve (in reference to the legendary and brilliant Seve Ballesteros who passed away following a long battle with a brain tumour last year) was referred to on numerous occasions during the week. Even the players themselves candidly admitted that Olazabal’s emotionally charged speeches were passionately overwhelming. World Number one, Rory Mcllroy, said “Some of us have broken down into tears with some of his speeches.”

After Europe had been given the runaround for the best part of two days, Ian Poulter, gave the defending champions a glimmer of hope following his heroics at the end of Saturday’s play, where he made five consecutive birdies resulting in him and McIlroy beating Jason Dufner and Zach Johnson. This became a pivotal point in the three-day competition. The players returned to the tea room and Poulter spoke of an electric atmosphere preceding their date with destiny.

On Sunday, Europe defiantly set off on their mission. Unlike their political counterparts, this was a European team operating gloriously in unison. Every single player believed they could win. The first five matches all went in the visitors’ favour. Luke Donald, Poulter, McIlroy, Justin Rose and Paul Lawrie were victorious. 11-10 to Europe. The standouts from the group being Justin Rose beating Phil Mickelson after being one down with three holes to play. Rose held his nerve to brilliantly hold at the 16th before sinking a beast of a putt at the 17th. With the match all square, Mickelson lost his cool on the 18th, leaving Rose with a possible birdie on the 18th. Where Mickelson failed, Rose triumphed as he nailed his putt and won the match. The tide had turned. The American roar became subdued but their lead was restored (12-11) through Zach and Dustin Johnson. You could sense the nerves. It was going to go right to the wire.

American Jim Furyk pushed a few putts wide and his opponent Sergio Garcia capitalised to win one-up, 12-12. The Americans responded immediately as Dufner won by two to regain a slender American lead at 13-12 meaning the USA needed one and a half more points to win the Ryder Cup. Lee Westwood then levelled the scores beating Matt Kuchar 3 and 2. 13-13 with two matches left which were both all square. If it was Seve himself writing the script, he would have won an Oscar.

The four final players on the course had, amazingly, not won a single point in the previous two days. German Martin Kaymer stepped up. Following discussions with German legend Bernhard Langer, Kaymer had a new perspective to the game and it served him well as he nailed a six footer on the 18th green meaning that Europe, against all odds at the start of the day, retained the Ryder Cup. Better was to come as Woods conceded on the 18th resulting in an all-square match against Francesco Molinari. Jubilant scenes as Europe won the 2012 Ryder Cup outright. 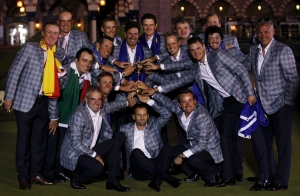 McIlroy summed up the incredible feat – “To play so well out here today knowing that Seve’s looking down on us, it’s just been one of the most incredible days that I’ve ever had on the golf course.” Much of the credit has to go to skipper Olazabal who never dared to entertain the notion of defeat. That was not Seve’s way.

Team Europe’s achievement was incredible. It was the comeback of all comebacks. It maybe even exceeds the all-time great sporting comebacks such as Muhammad Ali knocking out George Foreman during the Rumble in the Jungle and Liverpool overcoming a 3-0 deficit to win the Champions League in Istanbul. Olazabal’s famous words on Saturday night will be immortalised in Ryder Cup history – “It’s not over until it’s over – I learnt that from Seve.” 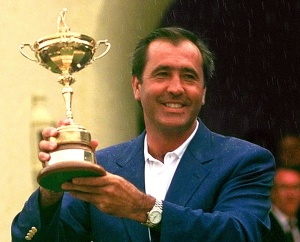