Another week of unsavoury scenes. By the time a famous old pro had tweeted that “the game has it’s faults but this is why we love it” in reference to league leaders Chelsea entertaining Manchester United at Stamford Bridge, the excitement had ended and villainy of football reappeared.

As a footballing spectacle the match had everything which defines the Premiership. Robin Van Persie and Wayne Rooney wreaked havoc to give United a 2-0 advantage before the table toppers roared back through Juan Mata’s masterful free-kick and then Ramires’ equaliser. Huge excitement on a late, Autumn, Sunday afternoon in the capital.

Mark Clattenburg, one of the top referees in England and on the provisional representative list for the 2014 World Cup in Brazil, turned the game on its head through two Chelsea dismissals in five second-half minutes. The first occurred when Branislav Ivanovic brought down the lively Ashley Young when the United winger had a genuine goal scoring opportunity. No complaints. The second dismissal however, which was a second yellow card to Fernando Torres for simulation, was a very poor decision. Torres was certainly clipped and went to ground. Sir Alex Ferguson threw in his two pennies worth, declaring that as a forward himself, he would have stayed on his feet, opting to conveniently forget that Young had largely done the same at the other end minutes earlier.

The result was understandable Chelsea anger and Clattenburg became a marked man. With two fewer players, United poured on the pressure and eventually found the net through a marginally offside Javier Hernandez. The goal scorer wheeled away in celebration, prompting a pocket of home fans to demonstrate their true colours by throwing a collection of missiles onto the pitch, injuring stewards in the process. 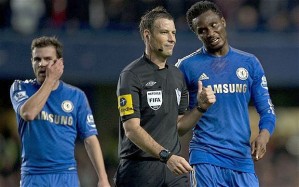 The officials were subjected to further censure and it is after that point that Clattenburg allegedly used ‘inappropriate language of a racial nature’. Furthermore after the full-time whistle, all hell broke loose when, again allegedly, the officials’ room was stormed by Chelsea players, with comments overheard, “I’ll break your f****** legs!”

After the chaos finally subsided, Chelsea put in an official complaint stating that Clattenburg had called Juan Mata a “Spanish t**t”, (something which the Spaniard did not hear) before he called John Obi Mikel a “monkey”. Both incidents have been vehemently denied by the referee.

Chelsea will find few sympathisers to back their claims since the club’s recent transgressions has resulted in a distinct lack of credibility. Of course, if Clattenburg is found guilty, this stance would change and his own career as a top official would be over.

However, it is highly plausible that Clattenburg has committed no offence other than the two incorrect footballing decisions which effectively handed the match to United on Sunday. With that in mind, the FA should throw the book at Chelsea in the form of docked points. Only then would their players realise that they are not above the law. Fines have proven to be ineffective deterrents, particularly at clubs whose owners have bottomless pockets. The reaction to United’s winner alone said enough that needs to be said about the thuggish undertone which generally precedes the club’s reputation.

On one hand you have a club that is labelled, in some quarters, a rich man’s Millwall and on the other, you have one of country’s top referees. Surely there is only one winner.