The London O2 Arena was packed to the rafters – a 17,800 capacity crowd in anticipation of a mouth-watering final. On one side of the net was the current world number one, Novak Djokovic, hoping to end the season on a high by taking home his second ATP Champions Cup. On the other side was the fans undisputed favourite – Roger Federer, who by contrast was aiming to lift the trophy aloft for the seventh time in his illustrious career. Incidentally, it was only the fourth time in the 43 year history of the ATP Champions Cup that the final was contested by the top two ranked players in the world. 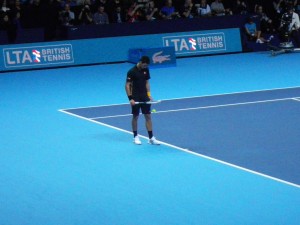 The match started well for Federer. The opening service game was comfortably over within minutes and he soon raced into a 3-0 lead. It was the Swiss at his sublime best. Aggressive from the offset in the search of quick, ruthless points. Back though came Djokovic through his trademark, can-do, will-do, gun-slinging attitude. The Serb deflected almost everything which Federer had to offer, fighting back to 3-3. After that the two current best players in men’s tennis produced an astounding exhibition of lightning base line rallies, exquisite drop shots and nimble footwork around the court. The latter particularly became the night’s theme for Djokovic. The exchanges resulted in plenty of gasps from the crowd. “This is UNBELIEVABLE!” one fan repeatedly stated. Enough said.

The point of the match was played out in the opening set tie-break, resulting in the vast majority of the O2 Arena to take to their feet applauding their appreciation for these two gladiators. After a furious baseline rally where Federer just could not put Djokovic away, the Swiss maestro produced the drop shot of drop shots to seemingly win the point there and then. Djokovic had other ideas as he raced to the net like a cheetah and then produced his own magic by, not only reaching the ball before the second bounce but by somehow improvising his own drop shot from an improbable position. It left Federer, and the crowd, wrong footed until the 17th time major winner instantly shifted his balance from left to right and ran with the flight of the ball before producing a truly majestic hook shot which dumbfounded his opponent to finally win the point. Incredible or even “unbelievable!”

The crowd’s joy was short-lived. The Swiss maestro’s timely moment of brilliance may have got him back into the tie-break but the momentum immediately swung back in Djokovic’s favour through two quick points to win the tie-break 8-6.

In the second set, tennis’ final showpiece of the season continued to dazzle. Like two old-school heavyweight boxers, they stood in the middle of the ring and traded heavy blows. Like many of today’s battles between the top men’s players, it became a battle of wills. Soon it was apparent that Djokovic had the upper hand and he took Championship point with great conviction through a back-hand passing shot. The Serb screamed with delight and it was apt that the world number one finished the season winning the Champions Cup. 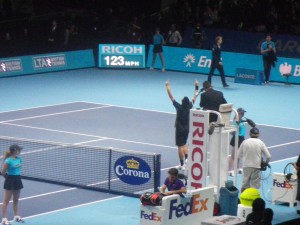 A victorious Djokovic dedicated his latest trophy to his ill father, Srdjan, who had been reported as suffering from an acute respiratory illness. “This was a title for him. He’s much better now. At a certain stage it was very critical. We didn’t know what tomorrow brings, but now he’s much better and he’s recovering. He’s still in intensive care. I’m going to visit him and see how it goes and try to bring the trophy with me and at least make him smile.”

Djokovic’s 2012 has not been as memorable as 2011 from a majors perspective but in retaining his world number one ranking, his consistency has been extremely impressive. “I actually feel more satisfied right now than last year, even though I had an incredible 2011. I feel this year, considering the circumstances that I had to face on and off the court, the expectations, all these things, has been even more successful for me.”

Djokovic started the year strongly by winning the Australian Open with a truly epic final against Rafael Nadal. Next came the chance of completing the Grand Slam at Roland Garros – since he was the reigning Wimbledon and US Open champion – but Nadal proved too tough a test on the Spaniard’s favoured clay surface in the final. Following his French Open defeat, Djokovic relinquished both his Wimbledon and US Open crowns, losing to both the eventual winners in the latter stages (Federer and Andy Murray respectively). After winning Wimbledon, Federer reclaimed top spot in the rankings, becoming the longest ever reigning World Number One player, eventually chalking up over 300 weeks ranked world number one.

However, thanks to a successful and consistent back-end to the season, Djokovic knocked Federer off top spot, only last week, and won the ATP Champions Cup to cement  2012 as world number one. In doing so, he amassed an impressive win-loss record of 75-12, winning six ATP titles in the process, and earning just shy of $10m in prize money for the season – Monday night’s victory alone resulted in a cheque for $1.1m.

With Roger Federer winning his first major in two and a half years at Wimbledon and Andy Murray finally getting a major (US Open) under his belt, it has been an exciting year for men’s tennis. All four majors were won by the current top four players – The Four Kings.

Melosport ranks the 2012 Australian Open as one of the best Grand Slam tournaments of modern times, culminating in what was surely one of the best ever finals at a Grand Slam tournament between Djokovic and Nadal. Nadal’s post-French Open injuries have been a blow and hopefully once he regains his fitness, the Four Kings will play out another sensational chapter in what has already proven to be an outstanding legacy.