International football returned this week with the vast majority of games being friendlies. Whilst there are some who render these games meaningless, others consider them to the beneficial.

Roy Hodgson is one who sides with the latter since November’s action enabled him to hand debuts to several players who have impressed domestically during the current campaign. England were able to give caps to Steven Caulker (who scored on his debut), Leon Osman, Wilfried Zaha, Raheem Sterling, Ryan Shawcross and Carl Jenkinson. Furthermore, Steven Gerrard joined the 100 cap England club, rubbing shoulders with the likes of World Cup winning duo Sirs Bobby Moore and Charlton.

For both Gerrard and the debutants it was a match which will never leave their memory banks, for one reason and one reason only – Zlatan Ibrahimovic. The giant Paris St-Germain frontman single-handedly won the match for the Swedes 4-2, after trailing 2-1 with less than 15 minutes remaining, christening the Friends Arena with all four goals. His hat-trick – the first scored against England since Marco Van Basten terrorised the Three Lions during the 1988 European Championships – was excellent. His first highlighted his impressive movement, acceleration and reflex skills for a big man. His second showed off his flawless technique and the third was all about raw power and accuracy.

He then did something else. In injury time, Ibra (to his friends) scored a fourth which combined all the qualities of the previous three. As Joe Hart raced out of his goal to head a hopeful ball forward away, Ibrahimovic, from 35 yards out, pivoted and leapt like a salmon. Whilst hovering matrix style in the Stockholm air, he unleashed a scissor kick, connecting perfectly with the ball which ended up in the back of the net, even evading a desperate defender who attempted to scramble clear in the goal mouth. Expletives, expletives and more expletives were the initial reactions. The swearing was not aimed at anyone, it was simply the only way to appreciate a bewildering moment of football genius. His four goal haul was the first ever against England.

After the match, with the paparazzi and media going wild Ibrahimovic said, “That’s the way it is with the English. If you score against them you’re a good player, if you don’t score against them you’re not a good player. I remember Lionel Messi before the 2009 Champions League final for Barcelona. Then he scored against Manchester United and suddenly he was the best player in the world. Maybe now they’ll say something like that about me.” Not strictly true regarding Messi but he is allowed his moment.

Continuing with the theme of Messi. The Argentine wonder was given a great opportunity to eat into Gerd Muller’s (pictured below) calendar year goal scoring record as his nation took on Saudi Arabia. Unfortunately for Messi, Cristiano Ronaldo’s voodoo doll paid off as the sides played out a goalless draw. This leaves Messi, who broke Pele’s 75 goals in a calendar year record last weekend, nine behind Muller. 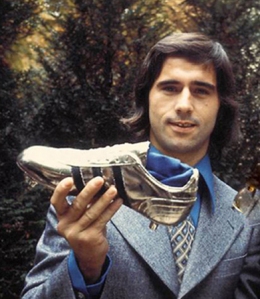 The German’s record was set in 1972 when he scored 85 goals in 60 games for both Bayern Munich and West Germany. Messi so far has 76 goals and his quest is only likely to fuel the much deliberated debate as to whether he is the best player of all-time. It should be pointed out that Pele’s 75 goal feat was achieved in 53 games, whilst last night’s appearance was Messi’s 61st of 2012. In addition, Wednesday’s blank meant that Messi shares the Argentinean record of 12 goals in a year with Gabriel Batistuta.