For the last three years, boxing fans across the globe have consistently sought out news surrounding the fight. As Manny Pacquiao swiftly moved through the gears and up the weight divisions by impressively dismantling his opponents, the undefeated Floyd Mayweather Jnr came out of retirement and kept his record ticking over nicely with consistent wins. The clamour for the two best pound for pound fighters to meet paled everything else in the boxing world as insignificant.

At times, a deal appeared to be close, but this always proved to be a false dawn. Although the Pacman hit a speed hump last June after controversially losing a points decision to Timothy Bradley, a fourth battle against Mexican Juan Manuel Marquez on Saturday night in the Nevadan desert was expected to yield a win for the Filipino and re-ignite calls for a $200m superfight against Mayweather.

The experts largely predicted a win for Pacquiao but six rounds into Saturday’s bout, the Pacman face-planted the Las Vegas canvas following a devastating overhand right from the Mexican, who in his words “threw the perfect punch.” The fight was over, the boxing world was in shock and the bargaining power of Pacquiao’s promoter, Bob Arum, went up in smoke. 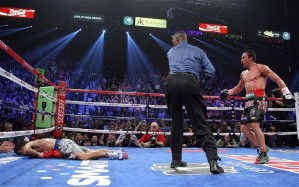 Saturday’s bout itself is likely to be voted Ring Magazine’s Fight of the Year after the two warriors waged a toe to toe war. Pacquiao was knocked down in the third round but recovered, handing out his own retribution in the fifth, flooring Marquez. The Pacman was on the front foot and whilst leading 47-46 on all three judges’ scorecards, Marquez unleashed the mother of overhand rights which connected perfectly with Paquiao’s chin. “I knew Manny could knock me out at any time. I felt he was coming to knock me out the last three rounds and I knew he was going to be wide open,” said the triumphant Mexican. Pacquiao, suffering his first knockout since losing the WBC flyweight title to Medgoen Singsurat 1999 commented, “I got hit by a punch I didn’t see.”

In stark contrast to Bob Arum, Team Mayweather’s bargaining power has significantly strengthened. Make no mistake, the superfight can still happen, but if it does, it will entirely be on the Money Team’s terms.

The American’s camp will smell blood and Mayweather will never be presented with a better opportunity to beat his old foe and walk into the sunset after cementing his place as the best pound for pound fighter of his generation.