“The sooner he wins something, the better” – David Moyes confirmed as Manchester United manager

So there we have it. After the yesterday’s bombshell concerning Sir Alex Ferguson’s imminent retirement from the game, football’s worst kept 24 hour secret was officially confirmed with the news that David Moyes has agreed to a six-year contract with Manchester United.

The current footballing climate can be unforgiving when headlines are dominated by the extraordinarily high turnover in managers yet the process in appointing Sir Alex Ferguson’s successor has been a well-managed one by the world’s biggest sporting franchise. In essence, prospective employers have an extremely small talent pool to choose from, particularly those who sit comfortably at football’s top table and have lavishly been presented with trophy after trophy for the best part of a quarter of a century.

The incumbents of the revolving Old Trafford door share characteristics such as discipline, drive and loyalty. So much so, that Ferguson himself played a pivotal role in the selection of Moyes as his successor. However, there will be those who point to Ferguson’s CV pre-Old Trafford. Ten trophies were won with an unfancied Aberdeen side in just eight seasons including three league championships, breaking up the Old Firm domination, plus a European Cup Winners’ Cup. Ferguson arrived at the club at a time when United were in complete disarray and his notion as a strict disciplinarian was a prerequisite in overhauling the club.

This challenge does not exist for Moyes as he inherits a squad who are English champions, with world-class training facilities and a sizeable transfer kitty. His brief will be the continuation in the deliverance of trophies, plus keeping the club’s self-publicised image of integrity intact. His lack of managerial silverware and European experience will come under severe scrutiny.

Moyes will have to hit the ground running. It is understood that United’s directors do not expect a period of transition and therefore his first season will be a daunting one. Even before then, the inbound Scot’s first task will be to address Wayne Rooney’s role at the club. Only today, United issued a fairly tough stance to state that Wayne Rooney was not for sale despite the playmaker asking Ferguson for a transfer two weeks ago (his second request in recent seasons). Furthermore, Rooney’s Twitter account now makes no reference to him being a Manchester United player, instead naming himself as a ‘NikeUK athlete’. 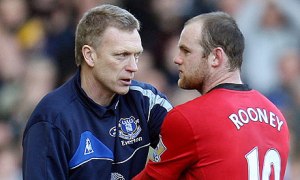 The two men are no strangers to each other. It was the former Preston boss who was at the Goodison Park helm when Rooney spectacularly introduced himself to the sporting world and it was also Moyes who successfully subjected Rooney and his representatives to legal proceedings following damning allegations in the youngster’s autobiography. It is believed the two have resolved their differences since then.

Those involved with the game have backed Moyes’ appointment. Gary Neville labelled it a “result for sanity”. He added, “I’ve seen some appointments in the last two years which, for me, show the nature of the modern world – a populist, short-term fix. Manchester United do not operate that way. They have an element of sense and they have always had that throughout the last 50 to 60 years.”

Alan Hansen though was surprised that United did not go after a more successful coach saying things would become very difficult “if he [Moyes] makes a bad start’. Despite this, a six-year contract does reflect the Old Trafford board’s belief in Moyes and the public backing by Ferguson is seen to be absolutely critical. There may be glitches along the way but, in United’s eyes, it works for the long-term.

Meanwhile, Everton chairman Bill Kenwright rightly bared no grudges commenting that Moyes has served Everton “wonderfully well” during the past 11 years. Toffees’ fans accept that they have lost their longstanding manager and Kevin Ratcliffe, who represented Everton during their glory years (1980-92), summed up the change in fortunes between the two clubs in the last 25 years, “this wouldn’t have happened 25 – 30 years ago. But it’s [Man United] a club year-in, year-out who are challenging for trophies.” Upon being questioned as to how much pressure Moyes would be under, Ratcliffe simply answered, “the sooner he wins something, the better” – a shared notion around Old Trafford.