Liverpool transfer news: Get the violins out for Luis Suarez

Since the FA banned Liverpool’s Luis Suarez for 10 games after he nibbled on Branislav Ivanovic’s arm, the Uruguayan has constantly complained of his treatment in England—nothing short of pathetic attempts in order to engineer a move away from Anfield.

His latest grievance was publicised by the Telegraph where Suarez was made fun of whilst with his family. “The other day I was walking in Manchester and up to me came three or four guys asking for a photo. When we were doing it, my wife says: ‘Luis, get out of there’. When she was watching me, one of them was making a biting gesture. I’m with my daughter and my wife, and it is something that irritates you. My wife began to get upset and they walked away laughing. These are things that you get tired of.”

Let’s paraphrase – “these are the things you get tired of.” He bit someone. He’s a grown man. On a football pitch. Not for the first time. Undoubtedly a genius with a football at his feet, but enough is enough, be a man, take the punishment and get on with it.

He’s also moaned to ESPN about his treatment from the media and also angered many by being stupid enough to play the race card. “I’m South American and I think that’s the root of all of this. Ever since I arrived I have felt bad, they have never judged me for my play but  with the attitude that he dives, protests, makes gestures, racism – everything.”

Ridiculous on two counts. Firstly, Suarez was in the running for both Player of the Year awards before his latest misdemeanour. One award is voted by his peers (fellow professional players) and the second is voted by football writers—effectively the media who he insists are out to get him.

Secondly, in terms of the racist angle, the moronic Suarez clearly chose the wrong place for that swipe since Great Britain is possibly the most multicultural country in the world. And the complaints of diving, protesting, making gestures and racism? No comment. 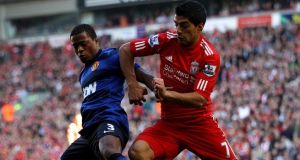 If he wants to move to Real Madrid, then he should just ask for a transfer and stop all the “I love Liverpool” rubbish. As per Robin Van Persie transfer saga last season—if you truly love your employers, stay. Simple. The issue here is today’s player contracts are loaded with incentives. Financially, Suarez will benefit from being sold without asking for a transfer. For Liverpool, the opposite applies and therefore the Merseyside club, and rightly so, will not sell the Uruguayan until he formally submits a transfer request.

Whilst he is currently away on Confederations Cup duty with Charrúas, any decision concerning his future is unlikely to be made until the end of June.