Manchester United vs Arsenal—will their epic rivalry be reignited at Old Trafford?

“Everything about him annoys me. He’s always ­complaining, whingeing. The man is a cheat and a coward. Everyone thinks he’s a nice guy but in fact he’s a son of a bitch.”

Patrick Vieira’s stinging attack on Ruud Van Nistlerooy, as per the Frenchman’s autobiography, epitomised the intense rivalry between Manchester United and Arsenal 10 years ago.

Regular high-octane clashes between the two clubs saw an abundance of bad blood, culminating with Sir Alex Ferguson being slapped around the Chevy Chase with a rogue, heat-seeking, slice of pizza. 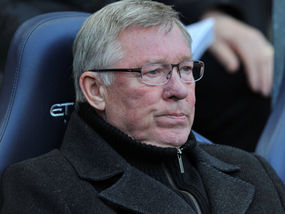 Fergie’s face was the final stop for a slice of pizza in 2004.
Source: Daily Mirror

The said culinary incident, which occurred in 2004, was mere child’s play compared to earlier matches—which consisted of uncompromising brutality, infamous spats and, on occasions, downright thuggery.

Nobody can pin-point with any resounding certainty as to where, and when, the intensity between the two rivals reached boiling point but it can be narrowed down to a short-list of matches.

In 1979, Arsenal beat United 3-2 at Wembley in late and dramatic fashion to win the FA Cup—could this final have sown the seeds of discontent? 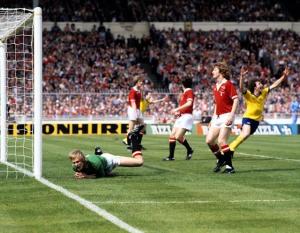 According to an article published in The Guardian, tempers frayed during Ferguson’s first match against the Gunners in 1987. The late David Rocastle retaliated following a hacking by the ever excitable Norman Whiteside, receiving a red card for his actions. Intoxicated by adrenaline, Ferguson and his coaching staff confronted George Graham on the opposition bench ensuring clashes between Arsenal and United were emotionally charged.

The following season Brian McClair missed a late penalty at Highbury in a FA Cup tie, which meant Arsenal progressed through to the next round. The Scot’s miserable afternoon was compounded after he received the brightest colour of relentless obscenities from Arsenal left-back Nigel Winterburn.

With the rivalry firmly up and running, the last quarter of a century has seen it’s fair share of memorable ties between the two.

McClair waited another year for his vengeance against Winterburn. A late tackle plus afters unsurprisingly sparked a notorious 21-man brawl. Rocastle’s observation was simple:

“They were kicking Nigel like a nightclub brawl. I ran over thinking, ‘You can’t have this’! We went in there and we stuck up for each other. At Arsenal we never, ever started any brawls – we just finished them.”

The Football Association severely reprimanded both clubs, deducting two points from Arsenal and one from United (Despite this handicap, Arsenal still went on to win the league that season).

The rivalry then cooled until Arsene Wenger’s appointment in 1996. His first full campaign at Highbury yielded the domestic double—inciting a new era of bitterness between the two clubs. By then, the roles of Whiteside and Rocastle had been allocated to Patrick Vieira and Roy Keane. 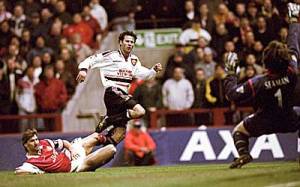 The epic FA Cup semi-final replay in 1999 was arguably the best match between the two. Brilliant strikes from David Beckham and Dennis Bergkamp left the game delicately poised at 1-1. Keane was sent-off and later Bergkamp had a penalty saved by Peter Schmeichel.

Ten man United persevered into extra-time and broke Arsenal hearts when Vieira uncharacteristically gave the ball away to Ryan Giggs, who slalomed his way from the half-way line to fire United into the final—United would go on to win the treble that season.

United’s treble winning team of 1999 ignited three seasons of league dominance (with Arsenal having to make do with three successive runner-up medals).

However, the Red Devils run was halted via a Sylvain Wiltord winner at Old Trafford in 2002. Arsenal’s 1-0 away win secured the club’s second domestic double in five seasons, maintaining their antagonistic rivalry. 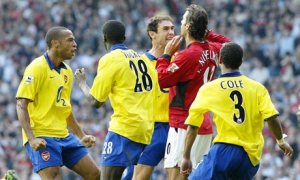 After clashing with Vieira, which resulted in a red card for the Frenchman, Ruud Van Nistlerooy missed an injury-time penalty to the particular delight of Martin Keown et al.

A scuffle broke out in the tunnel, resulting in Arsenal later admitting to nine misconduct charges brought by the Football Association.

For the third season running, sparks flew at Old Trafford.

Arsenal arrived in Manchester as defending champions on a 49-game unbeaten run. The Gunners were famously tagged as the Invincibles, since they avoided a single league defeat during the 2003/04 season.

United ended their run, winning 2-0, sealing their triumph with a disputed penalty. Wenger lost his cool, as did his players, and it all boiled over again after the full whistle—ala pizzagate.

Despite less quality at his disposal, Wenger has maintained his enviable record of 15 consecutive seasons of delivering Champions League football—a masterstroke considering the club were financially hamstrung by their move to the then new Emirates stadium. 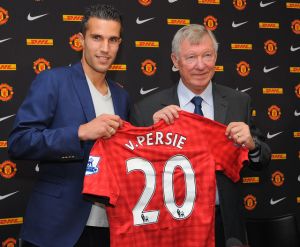 The lack of spending in North London came to a head in the summer of 2012. In a season where Arsenal were hammered 8-2 at Old Trafford, Arsenal’s skipper Robin Van Persie wanted out. With one year left on his contract and bemoaning the club’s lack of ambition, financially astute Arsenal had their hands tied.

United offered a sizable sum and Arsenal reluctantly accepted—to the Gunners fans dismay. The sale of Van Persie to United was unthinkable and their ill-feeling was compounded by the Dutchman winning the title during his first season at Old Trafford.

Cue Ferguson’s retirement and David Moyes’ appointment. Whilst this represented a transitional period at Old Trafford, Arsenal supporters protested against Wenger’s lack of summer acquisitions, with many clamouring for a change in management.

The transfer coup of German star Mesut Ozil followed and has, to date, buoyed the Gunners into producing largely blistering form. The doubts have evaporated and Arsenal travel to the defending champions, leading the Premier League with a noticeable five point gap. 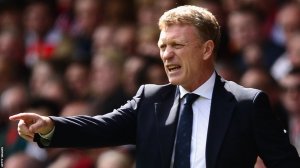 With Wenger, again, smelling of roses, he can afford a swagger into Old Trafford on the weekend. Meanwhile, his counterpart, Moyes, will certainly be feeling the heat after his turbulent start to his Manchester United career.

Admittedly, it is still early days but the Red Devils have already suffered three league defeats in their opening 10 games. That said, we have learnt over the years to never write-off Manchester United—but that was Ferguson’s Manchester United.

Both clubs have much at stake this Sunday. Are Arsenal the real deal? Is the dynasty really over at Manchester United?

This weekend’s encounter could go a significant way in answering these questions and just maybe a legendary rivalry could be reignited.