With the drama of the World Cup qualifying play-offs finally being digested, the 32 confirmed nations of the 2014 World Cup Finals will turn their attention to Costa do Sauipe—in the Brazilian state of Bahia.

On 6th December, this renowned holiday destination will host the draw of next summer’s World Cup. National team coaches of all the finalists will be in attendance, anxiously anticipating which other nations will cross their path. 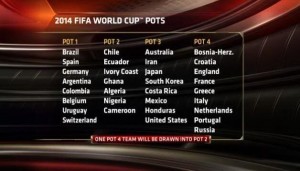 Therein, the next six months are likely to witness a footballing propaganda frenzy, as the delights of the Iguazu Falls and Copacabana are combined with flashbacks of the World Cup’s glorious past.

Do FIFA have a particularly tough assignment in selling the 20th World Cup Finals to the public? Football in Brazil? Owen Wilson would say: “Sure, why not!”

Once the nations know their fate, the countdown will be on. As per the excellent pre-London 2012 Olympic coverage, Melosport will deliver an in-depth, multi-part serialisation, exploring the history of the Beautiful Game’s World Cup Finals—commencing with the inaugural tournament, hosted by Uruguay in 1930, through a hugely memorable 80 years, culminating with the 2010 South African World Cup.