As the 2014 World Cup draws increasingly closer to kick-off, Melosport continues to round-up the best of the archives across a seven-part series 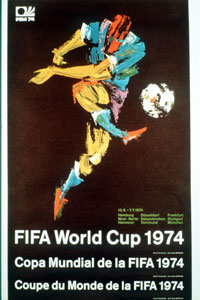 After Brazil gloriously triumphed for the third time during the Mexico World Cup, the Jules Rimet trophy remained with the Selecao permanently. 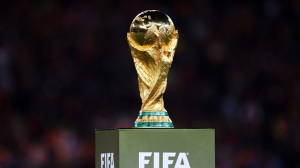 West Germany was awarded the right to host the 1974 tournament in 1966, with the hosts for the 1978 and 1982 events also selected. Football politics were evident as the Germans lobbied Spain for their support, which they would replicate for the 1982 World Cup finals.

There were shock omissions in 1974 as countries such as England (who had won the 1966 World Cup), France, Hungary, Spain and previous hosts Mexico all failed to qualify.  By contrast East Germany, Australia, Haiti and Zaire participated in their first finals.

The format was tweaked as the top two respective teams from each group would advance to participate in an additional group phase, where the winner of each would contest the World Cup final.

Following in the revolutionary footsteps of Austria, Hungary and Brazil in the past, the Netherlands became the latest national team to showcase a unique brand of football.

Rinus Michels pioneered the concept of Total Football which dazzled audiences as Ajax of Amsterdam dominated European competition with three successive European Cup victories from 1971 to 1973.

The game was about space and how you controlled it: make the pitch big when you have the ball and it is easy to retain it; make the pitch small when you do not and it becomes far more difficult for the opposition to retain it—Jonathan Wilson (Inverting the Pyramid)

East and West Germany suffered the unfortunate fate of being paired together and their match was riddled with political tension. To the dismay of the host nation, they were beaten 1-0 following a Jurgen Sparwasser goal.

World Cup finalists in 1970, Italy became unstuck in a group which contained Argentina, Poland and Haiti. Although Haiti lost all of their matches, Emmanuel Santon scored the opening goal in their match against the Azzurri, which ended the legendary Dino Zoff’s run of not conceding a goal of 1,142 minutes.

Scotland was the United Kingdom’s sole shining light in 1974 but faced a relatively tough group in holders Brazil and Yugoslavia. Zaire made up the numbers and became the two-point banker in the group (two points for a win back then). The former trio all drew with each other, meaning the Tartan Army’s poorer goal difference resulted in World Cup’s first-ever elimination of an undefeated nation.

In the second round, Group A contained a Hollywood line-up as holders Brazil faced Holland, Argentina and East Germany. The scheduling of the group matches meant that Brazil’s final match against Holland effectively became a semi-final—as the winner progressed to the final. The Dutch knocked out the holders 2-0 with the irrepressible Johans—Cruyff and Neeskens—scoring. 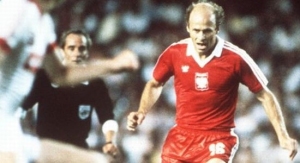 The same scenario occurred in Group B as West Germany and Poland won their previous respective matches and played each other for a place at the Olympiastadion in Munich. Although the Germans prevailed 1-0 to set up a final against bitter rivals Holland, Poland, who had eliminated England during the qualifying campaign, enjoyed their best World Cup performance in 1974 with Grzegorz Lato the competition’s leading marksman with seven goals.

Despite the historical hostility between the two countries, the final was billed as Cruyff versus Franz Beckenbauer; Ajax against Bayern Munich. Bayern had ended Ajax’s European club domination as the Bavarians won the 1974 European Cup, plus West Germany had been crowned European Champions in 1972.

The first penalties in a World Cup final were awarded and converted (1-1), although German Bernd Hoelzenbein appeared to fall with ease for the German equaliser. Gerd Muller, who retired after the tournament, scored the winner just before the half-time interval.

Beckenbauer lifted the first FIFA World Cup trophy aloft as West Germany won the World Cup for the second time in their history and became the first European side to be both reigning European and World champions. 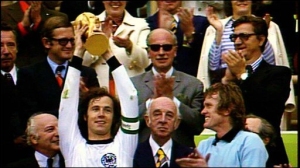 After bidding to host the World Cup as far back as 1938, Argentina was finally granted its wish 40 years later.

The 1978 World Cup is remembered for its controversy rather than its football. Following a military coup two years prior to the tournament, Argentina was under dictatorship rule. The Dirty War ensued, whereby many opponents of the political regime simply disappeared. 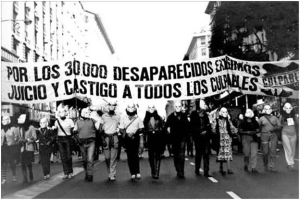 Protests during the Dirty War

As a result, it is believed many countries reconsidered their participation in the finals. Johan Cruyff’s absence was initially understood to be his objection against Argentina’s oppression. However, years later, it materialised that the Dutch maestro missed the tournament following a kidnap attempt on him and his family whilst in Barcelona.

European champions Czechoslovakia headlined a list of absentees who had failed to qualify, which also included the USSR, Yugoslavia, England and Uruguay.

By contrast Spain, Hungary and France made their first appearance on the global elite scene for 12 years, while Iran and Tunisia made their debuts.

A Cruyff-less Holland remained a force to be reckoned with. That said, Scotland, the sole British representatives for the second tournament running, defeated the Dutch via Archie Gemmil’s famous winner in a 3-2 victory during the first group phase. The celebrations were short-lived as by virtue of goal difference the Dutch progressed at their expense.

The tournament’s format was consistent with 1974 and as such, the Dutch overcame their Scottish hiccup to dominate a formidable second round group stage which included defending champions West Germany, Italy and Austria.

Short of avenging their World Cup final defeat four years earlier (they drew in their match against the Germans), the Dutch topped their group to advance to their second successive World Cup final.

Meanwhile, the host nation’s political controversies spilled out onto the sporting field. All of Argentina’s games were played later than other matches which gave them an unfair advantage in knowing exactly what outcome was required for progression.

They negotiated their initial group with two narrow 2-1 wins over Hungary and France and were paired with Brazil, Poland and Peru in the second group stage.

With Brazil beating Poland 3-1 in their final group game, the Argentines knew anything less than a four-goal victory over Peru meant the Selecao would finish top and therefore face Holland in the World Cup final.

Peru, who had only conceded six goals in their previous five World Cup matches, collapsed 6-0. Various stories of threats, bribes and physical intimidation from soldiers arose after the match but credible evidence to support these claims has never been uncovered—unsurprising given the regime in place at the time.

“The fans seemed to forget the poverty and the deprivation in the big cities. Most days we’d have fans running alongside our team bus, praying for us and holding rosary beads. You could see in their eyes just how much it meant to them. We laboured under a huge responsibility to win the tournament for our people and help them to forget their suffering. How could we not win the World Cup for these people?”—Argentinian striker Luque explaining the squad’s vigour

Notwithstanding Luque’s comments, the final was a contentious affair. With the defining image of blue and while ticker tape flying around the ground, Argentina’s delayed appearance onto the pitch further antagonised the already hostile atmosphere brewing within the Estadio Monumental in Buenos Aires.

La Albiceleste players then needlessly took exception to a bandage worn by Dutch winger Rene van de Kerkhof (one which he had worn for the majority of the tournament) delaying matters even further.

Once the match commenced, tension levels were at boiling point and Italian referee Sergio Gonella found it difficult to exercise control, evident by ferocious challenges which largely went by unpunished.

Mario Kempes scored his fifth goal of the tournament to give the hosts the lead before Dirk Nanninga headed in a leveller. With seconds of normal time remaining Robbie Rensenbrink hit the woodwork for the Dutch. In extra-time Kempes added his second of night, to make him top scorer at the finals and Daniel Bertoni wrapped up the proceedings.

Argentina became the sixth country to be crowned world champions. 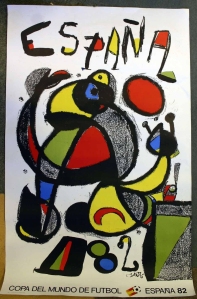 For the first time in the World Cup’s 52-year history, the finals expanded from 16 to 24 teams.

Remarkably Holland (successive finalists in the 1970s) failed to qualify for the 1982 finals, while England successfully negotiated its first fruitful World Cup qualifying campaign for 20 years (qualification was not required as hosts in 1966 and then defending champions in 1970). 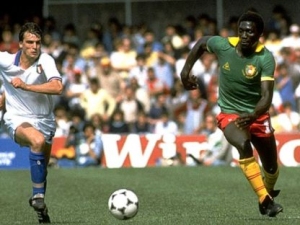 Cameroon were eliminated despite being undefeated

Cameroon caused a stir in their first World Cup by being undefeated during the group stage but were eliminated as Italy had a healthier goals scored record (their goal difference was the same).

Algeria suffered a similar fate whereby they won two matches in their group but lost out to Austria and West Germany on goal difference—the European neighbours played out a dubious and timid 1-0 German win to ensure both countries’ progressed.

Hosts Spain were humbled as Northern Ireland caused a huge shock by beating La Roja on home soil to finish top of their group. Spain though still scraped through to the next round.

Given Britain and Argentina had been at war due to the Falklands Conflict, England’s participation was an uncertain one.

After much deliberation the Three Lions travelled to Spain and Manchester United midfielder Bryan Robson set the tone of their tournament by scoring after 27 seconds against France—on route to a 3-1 win. 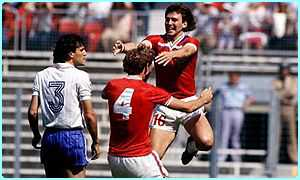 Robson scored a double against the highly rated French

England joined Brazil as the only two nations to amass a 100% record in the first round. Whilst little was expected of England before the tournament, the Selecao had an all-star team, which contained the likes of Zico, Falcao and Socrates—their firepower rivalled that of the legendary 1970 World Cup side.

Coach Tele Santana had such an abundance of playmakers at his disposal, that he adopted a 4-2-2-2 formation to accommodate the lavish quality within the squad. Brazil’s 1982 team has been widely regarded as, alongside Hungary of 1954, the best team never to win a World Cup.

In the second round group stages, Ron Greenwood’s England side faced West Germany and Spain. Two scoreless draws meant England were eliminated despite a healthy record of three wins and two draws from five matches.

In Group C, Italy and Brazil both put the defending champions Argentina (including a 21-year-old Diego Maradona who was sent-off after lashing out at Batista) to the sword.

Their face-off was a straight-forward semi-final eliminator and Paolo Rossi scored a hat-trick on route to the Golden Boot as the Italians prevailed 3-2 in a hugely entertaining contest.

Elsewhere France had gathered precious momentum, by beating Austria 1-0 and Northern Ireland 4-1 to qualify for the last four.

In the semi-finals they faced West Germany. An absorbing match ended 1-1 after full-time and 3-3 after extra-time and became the first to be determined by a penalty shoot-out, where the Germans prevailed.

However, despite the goals, extra-time and penalties, the match will always be remembered for the horrendous tackle by German goalkeeper Harald Schumacher on French player Patrick Battiston.

Battiston was knocked unconscious, lost teeth and had his jaw broken as Schumacher clattered him following a through ball. Amazingly, a remorseless Schumacher remained on the pitch and the referee did not even deem the incident to be a foul.

In the other semi-final, a Rossi double dealt with Poland resulting in an all-European 1982 World Cup final. Furthermore, it was the first tournament in 12 years where the host nation failed to make the final.

The Italians executed their game plan to perfection via a mean defence and lightning quick counter attacks as they raced into a second-half 3-0 lead. Marco Tardelli’s elation at scoring the second goal has become one of the iconic World Cup goal celebrations. Despite the Germans pulling a goal back, the Italians held out and won the World Cup for the third time—their first since 1938.

– World Cup Archives—Part II: From Capoeria Disappointment to the Emergence of Pele (Brazil 1950 to Sweden 1958)

– World Cup Archives—Part I: From Launching one of the World’s Greatest Sporting Dynasties to the Brink of War (Uruguay 1930 to France 1938)