World Cup 2014: The Swiss Fashion a Late Victory as Messi Gets Down to Business

It was a tie on paper which failed to ignite huge anticipation, yet by full-time it had been a cracker.

There was significant drama in the 92nd minute, with the scores locked at 1-1 when Ecuador attacked and looked certain to score a winner.

Swiss midfielder Valon Behrami produced a superb tackle to thwart La Tri and galloped downfield. He was checked midway in his own half, but speedily returned to his feet with the referee waving play on. The ball was eventually shifted to the left and a whipped cross was met emphatically by Haris Seferovic to win the match.

Set-pieces manufactured the match’s first two goals as Enner Valencia headed Ecuador in front in the first half and Admir Mehmedi equalised for the Schweizer Nati soon after the break with only his second touch of the match. 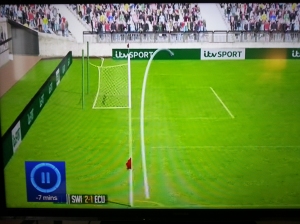 Glenn Hoddle, a pundit for ITV, produced a graphic to demonstrate to flight of the two almost identical set-pieces, which were different to conventional swerving deliveries—as these dipped significantly, which caused problems for the respective defences.

In a match dominated by the French, there were two critical decisions which could have changed the outcome of the game.

Wilson Palacios was sent-off for a second caution after he bundled over Paul Pogba in the penalty area—Karim Benzema scored the resultant penalty kick on the stroke of half-time. However, there were arguments as to whether Pogba should even have been on the pitch after he lashed out earlier on following a Palacios foul.

The second moment of controversy surrounded Les Bleus second goal—an own-goal from Honduras’ goalkeeper Noel Valladares. Goal-line technology signalled that Benzema’s header, after striking the post and rolling across the goalmouth, was inadvertently knocked over the line by the keeper.

Replays did confirm the goal, albeit not without confusion, resulting in initial disagreements among players, coaching staff and supporters in the stands. However the introduction of technology in the sport passed its first stern test with flying colours.

Benzema scored an impressive third French goal, from a tight angle, to close out a comprehensive victory in a bruising encounter against the overly physical Hondurans.

For many, Lionel Messi will be never considered on a par with the likes of Diego Maradona and Pele until he has his hands wrapped around the World Cup, notwithstanding the fact the Barcelona forward has won six La Liga titles, three Champions Leagues and two Club World Championships, all by the age of 25.

Argentina have brought a weight of expectation with them to this World Cup for various reasons. One, a tactically astute coach, in Alejandro Sabella, has replaced the ever-volatile Maradona. Two, they are playing on South American soil and; three, are armed with a stunning array of goalscorers in Messi, Sergio Aguero and Gonzalo Higuain.

“From the outset, reaching the semi-finals is our first objective.”—Coach Sabella commented as Argentina have failed to progress further than the quarter-finals since 1990.

The match marked Bosnia’s World Cup debut and, following the struggles of war in the early 1990s, their maiden World Cup finals appearance has unified the entire nation in an unrivalled capacity.

The atmosphere before kick-off in the Estadio Maracana in Rio de Janeiro was highly charged and Argentina took the lead inside three minutes as Sead Kolasinac scored an own goal following a Messi free-kick.

From there, Argentina surprisingly looked disjointed with Messi heading the list of subdued performances. The Bosnians controlled the game without creating real chances.

At half-time, Argentina brought on Higuain plus changed their formation to a back four, as opposed to the back three. The game opened up and the Argentines who squeezed into the Maracana were in raptures as Messi scored a vintage goal midway through the second half—incredibly his first World Cup finals goal since 2006.

Bosnia pulled one back through Vesad Ibisevic with six minutes remaining but La Albiceleste held on to register an opening win.