With only nine league matches left to play, Leicester City sit five points clear at the summit of the Premier League table. 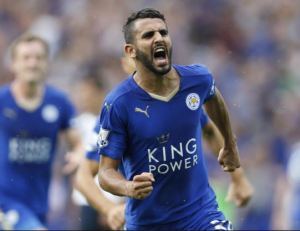 Riyad Mahrez has been in fantastic form all season

Claudio Ranieri’s meticulously drilled side have silenced the doubters during the current campaign but can they continue their clinical assault on English football’s elite?

Certainly, the media have gone to town with their short-sighted opinions that this is the most exciting season. Without doubt, if the Foxes do go on to lift the Premier League trophy in May it would be both unprecedented and a superb achievement for the Midlands club.

However the current landscape is not unique. During the inaugural 1992/93 Premier League season, Norwich City threatened the stun Aston Villa and Manchester United to the league crown.

With six rounds of matches left during the 42-game season, the Canaries (although having played one game extra) were one point ahead of their rivals. Furthermore, the defending champions – Leeds United – were languishing in the bottom half of the table which is uncannily similar to Chelsea this season had they continued under Jose Mourinho.

Back to 1992/93, United put a run together to seal their first title since 1967 while Norwich fell by the wayside as they collected just six points from the same number of games.

Away from the romanticism of a smaller club being crowned champions, recent history suggests that the title is not a foregone conclusion until it is mathematically impossible for the competition to reel in the leaders.

In the 2011/12 season, Manchester City found themselves eight points behind their city rivals United with six games to go which led to a drama-fuelled emphatic finale at the Etihad stadium.

Two years on Liverpool looked destined to reclaim their crown as the English Champions after a 24-year absence. They led the table by five points with three games remaining but a slip-up by captain Steven Gerrard was a catalyst for their collapse.

At Christmas 2014, Leicester City were rock bottom of the Premier League and favourites for the drop. Now 15 months later and they are odds-on favourites to win this season’s Premier League crown. This is largely thanks to Claudio Ranieri.

The Tinkerman’s reputation took a hammering after a brief stint managing Greece. A humiliating home defeat to the Faroe Islands ended the Italian’s fleeting tenure in Athens. Therefore his move to Leicester caught many fans by surprise, particularly one of City’s favourite sons — Gary Lineker.

They face visits to Chelsea and Manchester United in May which could be pivotal but straight-forward opposition in March and April such as Crystal Palace, Sunderland and Swansea City will probably be far tougher on the pitch than they are on paper as Leicester are now a very well-known commodity.

Leicester are not set upon by opposition teams as they once were. The Foxes are now facing opposition as league leaders and are being given the respect the deserve. However, in doing so, this poses Ranieri a problem. Before, he could set up his side to sit back, soak the pressure and play effectively on the counter-attack. Now Leicester are expected to dictate the play which leaves them in unfamiliar territory in grinding out victories.

If any of the said three were to embark on a three-point winning streak for the next six weeks, the pressure may well get to Leicester.

Ranieri has previously argued that there is no pressure because their objective at the start of the season was simply to stay in the division but their supporters’ expectations would have realigned given their good fortune.

How Do Leicester Win The League?

In Riyad Mahrez, Leicester’s playmaker is the 2015/16 Player of the Year in-waiting and has contributed significantly to the cause with 15 goals and 10 assists in 28 league games. Jamie Vardy who had a hot streak in the first half of the season has scored 19 in 29 league games overall but only his four league goals since mid-December.

If Leicester are to maintain their challenge Vardy needs to rediscover his prolific goalscoring form if Mahrez endures a dry spell.